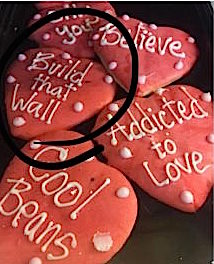 A post to the Edmonds Moms Facebook page has created a controversy that, predictably, is as segmented as current U.S. politics.

When Ana Cabrera entered Edmonds Bakery recently, she noticed a number of Valentine’s Day-themed cookies. Mixed among them was one with the words “Build that Wall.”

She took a picture, naturally. A friend posted it on Facebook.

Cabrera, on her own Facebook page, wrote “Don’t f--- with this Latina. I’ll end you,” in a “feeling determined” status update.

Many have said that...