Perrinville gets a bookstore 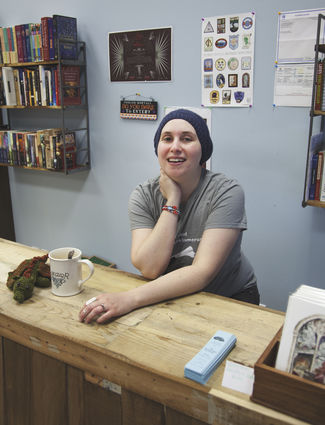 Annie Carls new and used bookstore is located in Perrinville.

Endless ideas, other lands and worlds, characters and people she could never otherwise meet and, of course, entertainment. They are the reasons Annie Carl, owner of The Neverending Bookshop in Perrinville Town Center, loves books.

“The books I’ve read and loved become so much more than stories,” she said. “I go back to them over and over. With each reread, I gain something new from them. That’s an incredibly personal experience I hold close.”

The literary journey that led Carl to her current bookstore started at age 14, when she worked at Mr. B’s Bookery in Kingston. She was already an avid reader at that point, and was excited to work at a store close to her house.

“I went in every week for almost a year before Bill and Shirley Wiley hired me. They had expanded the store and needed a little extra help. I worked about four or six hours a week.”

After a few years, the owners began training Annie on running a bookstore. She worked there seven years before becoming a journalist. After suffering a bout with Non-Hodgkin lymphoma at 24  she’s now 34  she started looking for work again.

She found a job at Third Place Books in Lake Forest Park, working there five years before opening The Neverending Bookshop in Bothell in 2015, moving it to Perrinville after she lost her lease .

Annie said her vision for her shop is simple.

“I’m selling ideas, possibly new to the reader, as well as worlds and characters. I’m selling hours of entertainment, education and joy. I suppose someday I would like to consider expanding the sections. My new location in Perrinville is twice the size of my old location in Bothell. The ability to grow here is exciting.”

Annie sees Perrinville Town Center which borders both Edmonds and Lynnwood  her store is in Lynnwood  as a funky spot that’s seeing growth. The building owner is looking to draw more retail to the area, she said.

Friends and family are what makes Annie’s bookstore unique. Her mother, Nancy, opens the shop on Sundays. Her friend Chaya opens on Thursdays while Annie is at preschool with her son, and her husband stops by to work from time to time.

“My son even helps out by welcoming people to the store and ‘helping’ them find books they might not necessarily want,” Annie said. “But it’s pretty cute to watch him try. It really does take a village to raise a bookstore.”

Running a bookstore is both fun and stressful, as you might imagine, but she says it’s one of the most powerful things she’s done in her life. Constantly learning new things about the book industry satisfies her longing to be a lifelong student.

She loves being her own boss, one who can make up the rules as she goes along.

Of course, she’s got a list of her favorite books.

“Usually whatever book I’m reading right now is my current favorite. Right now that would be ‘The Hating Game’ by Sally Thorne and ‘The Book of Delights’ by Ross Gay.”

Her all-time favorites include everything from Nnedi Okorafor, the “Harry Potter” and “Cormoran Strike” series by J.K. Rowling, “The Long Way to a Small Angry Planet” by Becky Cambers, “Sabriel” and the “Old Kingdom” series by Garth Nix.