A new man: Jess Cienfuegos is finally at peace, and ready to tell his story 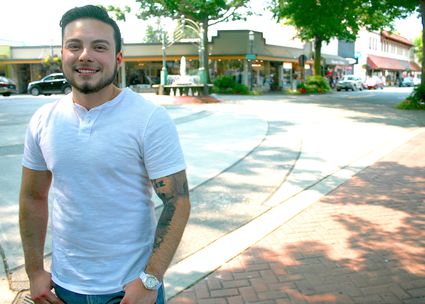 Jess Cienfuegos: Its just been a long journey, and its not over yet. But Ive come to a good place where Im allowing things to be more or less normal. Whatever that means.

When Jess Cienfuegos grabs a chair at Red Twig Bakery in Edmonds, the challenge is not to stare.

The 26-year-old’s beard is trim and neat; a light moustache is visible above his lip, and a piercing is embedded into his lower lip. A white shirt strains to hold in his barreled chest. His biceps bulge, and his left arm is muscular with tattoos.

Jess’ smile is welcoming. He’s outgoing and friendly during an hour-long interview. He seems happy and content. He fields questions thoughtfully. Honestly. He wants people to hear his story.

I met Jessica Cienfuegos when she was a student at College Place Middle School. She was on a Sno-King basketball team with my daughter. I was the assistant coach. As you might expect, personalities were all over the place.

There were the giggly girls. The aggressive girls. It was more of a social gathering than a competitive team, as the girls bonded and quickly learned to work with each other.

Jessica was the quiet one. Shy, seemingly afraid of doing much with the ball on court.

I had no idea what she must have been going through. What she was thinking. Who could know, outside of her supportive mother, who cheered her on from the sidelines?

I’ve wanted to tell Jess’ story for some time. But the incremental acceptance of transgender people today simply wasn’t there in the not-too-distant past. Earlier this year, I asked Jess if he was ready to share his story, to let the community know who he was, what he’s become, how he’s changed for the better.

Jess is a brave man. He’s ready to speak to us. And it seems especially apt to publish his story during Transgender Awareness Week.

Jessica grew up on the other side of the mountains, in Sunnyside.

“The initial conversation I had with my mom about transitioning was when I was about 4 or 5,” he said. “I knew that something was off  I didn’t fit in. I couldn’t figure it out. I didn’t feel normal, and it really sucked.”

As he spoke, Jess seemed at peace. Again with an easy smile. He broke into laugher at my lame memories of attempting to coach a bunch of girls on the finer art of dribbling and jump shots.

Jessica’s family moved to Snohomish County when her mother  who now works for the Edmonds School District  was accepted at the University of Washington. After elementary school and College Place, Jessica attended Edmonds-Woodway High School, where she met a girl named Cristina when they were both sophomores. They fell in love.

Jessica didn’t share her most intimate feelings to Cristina at first. But Cristina would soon learn of her girlfriend’s innermost thoughts. How could she not?

If love does truly conquer all, Cristina's devotion to Jessica and what she was to become showed how love could transcend the corporeal with devotion to the soul and spirit.

“Our love for each other was unchanged,” Cristina said. “Leaving was never an option, as I came to realize there would be moments of hardship, but that it would have been harder to be apart.”

So Cristina continued by Jessica's side as Jessica picked up an associate degree at Edmonds Community College and attended the University of Washington, earning a bachelor’s degree in architecture.

“Cristina stuck with me when I was trying to figure it all out,” Jess said. “I came out in stages. I don’t know if it’s luck, or the people I gravitate to, or who gravitate to me. But I’ve been fortunate to have constant support from my mom, my wife, my sister and friends.”

Today, Jess and Cristina are married, and own a house in Mountlake Terrace. They have a puppy, and are expecting their first child in April.

“You can say that my wife and I grew up together, since we met at such a young age,” Jess said. “We’ve learned a lot about each other, about life and about ourselves during the span of our 10-year relationship.

“Like in any other relationship, we believe that you are and should be with a partner who loves you for who you are as a person  appearances and other superficial characteristics aside  and just as importantly, challenges you to be an even better person. As minorities, we have supported each other through tougher times and celebrated each other during more accomplished times.”

Jess began his transition almost three years ago, with the help of his mother’s insurance. It was a momentous decision. But it was one Jess felt he had to take. Becoming trans isn’t something decided on overnight. But Jess, like most trans people, felt he just couldn’t live in the body he was born in any longer.

“The process itself takes a lot of time and energy,” he said. “It’s something I had to learn. I had to really dive in and let it consume me. It wasn’t just me involved  it was my family, my wife  all of those who were close to me were involved.

“It’s just been a long journey, and it’s not over yet. But I’ve come to a good place where I’m allowing things to be more or less normal. Whatever that means.”

Jess is about halfway there on his surgery. As he says, his “top part” has been removed with chest reconstruction, and he’ll be on hormones forever.

Surgery was done at La Belle Vie, a plastic surgery center in Tukwila.

Jess said he experienced wild mood swings at first, moods that have calmed down. His body was changing. His emotions were off the charts.

“I noticed a big change,” he said. “Now, I’m not so emotional. I don’t cry as much. I still have feelings, but there’s a difference between female and male hormones, and I can tell, Hey I’m low on T (testosterone), and need an injection.”

It’s all been an adjustment, which Jess would say is certainly an understatement. Daily life continues  there’s work at his job in customer service management in Bothell, and Jess realizes he has to put his career on hold for now  he wants to get a master’s degree in architecture at UW  but has to focus on the upcoming addition to this family.

The couple conceived using both intrauterine insemination and in-vitro fertilization.

“Cristina carried both times,” Jess said. “In other words, we had the same sperm donor for both procedure types. One procedure was with her eggs and the other with mine.”

And here’s the answer to the question everyone wants to know.

“Yes,” Jessie said. “I plan to have ‘bottom surgery,’ but am just putting it off for a bit as we decided getting started on children and, financially speaking, this would be the best course of action now.”

Jess said that, in addition to his professional work, he’s committed to community service.

“My Mom has been a big influence,” he said. “Giving back to the community is something I want to pass on to my kids.”

“I am a very proud mother of Jess, and am honored, blessed and deeply humbled as I continue to learn ways to meaningfully support him,” Garcia said. “Jess has been an inspiration for me, and I love him with all my heart.”

When his outside looks changed, Jess said his inner confidence level grew. It’s like night and day, he said.

When he meets friends from high school who may not know about his change, he said he tries to make them feel comfortable.

“I try not to make them feel guilty about anything,” he said. “I’ll say, Hey, how are you? There’s been a lot of changes.”

“I always welcome questions. That is someone else making an effort to learn about my life, things I’ve had to struggle with. Plus, I’m on Facebook, and family and friends are always posting photos.”

As part of his planned community service, Jess will no doubt interact with others who are undergoing gender reassignment or questioning their sexuality. According to the September issue of Pediatrics, transgender adolescents attempt suicide at a much higher rate than young people whose gender identity matches the sex on their birth certificates.

Many feel marginalized from their families, their friends, society as a whole.

“Eventually, there is a light at the end of the tunnel,” Jess said. “It’s hard to see it sometimes because you’re stuck in day one of your transition, and you don’t have any facial hair. Eventually it’ll come if you focus on each and every day being your true self, not only physically, but emotionally, because it is a very emotional process.

“You have to navigate knowing there is support, even if it’s not in your immediate circle. Be open to help, be open to others wanting to know about you.”

As you might imagine, living in a man’s body in what is still a man’s world  although that is clearly changing  is a fact of life for Jess. He’s seen both sides of the gender equation. The male gaze diminished after he changed genders, for example.

“The guy world? A total game changer,” he said. “I talk to my wife about it and say I really had to learn a whole new language. Beforehand, I could have a conversation with a girl, and you’re very overly talkative; you tie in a lot of emotions. You talk and talk and talk.”

Jesse laughs. It’s all good. Comes with the territory.

“It depends on the crowd, but sometimes I have to go into bro mode. I’m still kind of learning.

“I don’t have a group of friends, per se, that I go out with. I don’t get the weird looks anymore, but restrooms have always been an issue, right? I’ve gotten yelled at for going into a woman’s restroom, but now I don’t. But then you have the stall issue.”

After our interview in Edmonds, I emailed Jess to get any final thoughts on his coming out to the community and his relationship with his wife.

This is what he wrote:

“For us, our relationship is normal and has always been. We’ve gone through the growing pains, we had the first dates, went to school dances, got our first apartment, our first car, graduated college, bought our first home and now will be having our first child.

“No one prefers to take their chances at a fertility clinic, be a part of a long process or pay extra just to have a child. And while most wouldn’t see this as ‘normal,’ we see it as another unique stepping-stone that we just had to overcome, together.

Jess and Cristina Cienfuegos are expecting their first child in April.

“Although the mechanics of many processes in our lives may differ  and we may have to deal with additional roadblocks placed out there for us by society  we know that we will always at least have one person in our corner, and that matters more.

“There are laws and situations created by society, where minorities are made to feel ‘less than,’ ‘abnormal’ and ‘unworthy.’ Or have to work harder to accomplish from the basic to the more elaborate goals in life.

“We know the struggle; we learned about it from our parents who immigrated to the United States. Through their stories and their struggles, we have had the courage to stand up for what is right, stand up for ourselves, and dream big.

“Our story is and has been an important reminder of why we continue to write the next pages, together.”