Meadowdales Nate Hebert runs with the ball after making his second interception against Everett.

After losing 45-7 to Squalicum in what coach Matt Leonard described as a total system failure on both sides of the ball, the Mavericks were forced to look deep within themselves.

Leonard and his coaching staff raised their concerns about Meadowdale’s disappointing effort during a team meeting on Monday.

Leonard and his staff wanted to know what pride the Mavericks had and how were they were going to respond on homecoming night against a potentially dangerous opponent.

“It was kind of a gut punch to everyone,” senior running back/defensive back Nate Hebert said of the team meeting.

That gut punch seemed to awake a juggernaut, at least for one game, as Meadowdale responded with a breathtaking performance from start to finish in a 48-14 rout over Everett in a Wesco 3A South football game Friday, Oct. 5, at Edmonds Stadium.

The Mavericks scored early and often, jumping to a 20-0 lead in the first quarter and extending it to 48-7 at halftime, a lead so large that the running clock/mercy rule was invoked for the entire second half.

Meadowdale couldn’t wait to get back on the gridiron to put the disappointing loss to the Storm in the past.

“We were just so juiced in the locker room,” said Hebert, who ran for two touchdowns and also picked off two Seagull passes. “We came out. We’re on offense. We were going to punch it down and score. Ray (Free) scored on the first play. That’s just crazy.”

Junior quarterback Hunter Moen connected on a 76-yard touchdown pass to Free to give the Mavericks the early 7-0 lead. Hebert then intercepted a pass to give the ball back to the offense. The Meadowdale senior running back didn’t have time to rest as he scored on a 1-yard run and then added another 4-yard TD run later in the first quarter.

“We’re a momentum team. We like to build off what we do,” Hebert said. “We had it rolling in that first quarter.”

Senior lineman Alex Maxwell was having trouble catching his breath and it wasn’t because of the play on the field.

“I was getting gassed from celebrating,” he said. “It was nice. I didn’t expect either.”

Maxwell noted that the Mavericks (3-1 in the league, 3-3 overall) continued to put their feet on the pedal in the second quarter, scoring four more touchdowns. Moen threw a 10-yard touchdown pass to Mason Vaughn and a 11-yard TD to Free. Moen also ran 1 yard for a score and Ian Newsom had a 3-yard touchdown run.

In addition to Hebert’s two interceptions, the Mavericks recovered three fumbles, including two on kickoffs when the Seagulls had trouble picking up the ball.

“It was huge,” Maxwell said of winning the turnover battle. “Our sideline and crowd went crazy after all those big plays. It’s huge for us to get going and get firing so we can keep scoring.”

Players sign a turnover bucket whenever they recover a fumble or intercept a pass. Hebert signed his name for the first time this season.

“That’s fun. Those change the game,” Leonard said. “If you can turn people, it just changes the game dramatically. We’re proud of our defense. They gave us short fields. The offense did what they needed to do to score.”

Hebert appreciated the play of the offensive line

“We’ve got the best offense in Wesco if you think about it,” he said. “It’s really a credit to the O-line. They were out there blocking for us. They were really moving everyone out tonight. Alex Maxwell and Alex Krueger and everyone in between were physical tonight. That was a physical team out here. We wanted to be better than them.”

“We have to win out if we want to win a league title and that was our goal in the preseason,” Leonard said. “We’ve got to win the next two weeks.” 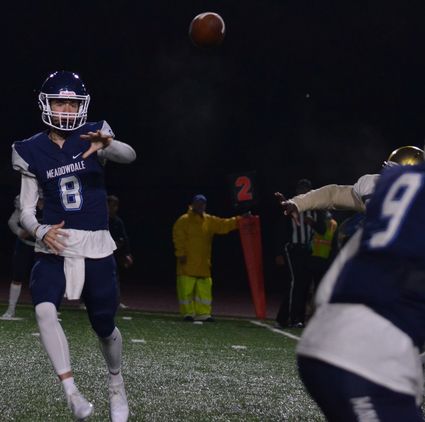