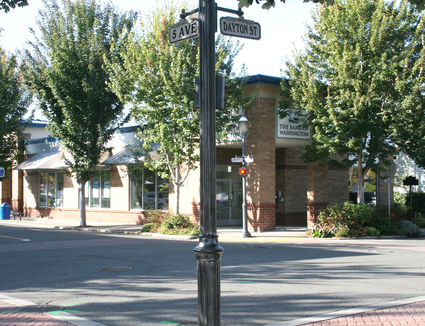 The Edmonds branch of Bank of Washington is on the corner of Fifth Avenue South and Dayton Street.

Lynnwood-based Bank of Washington, which started life more than 20 years ago as the Bank of Edmonds, has reached an agreement to be acquired by Sound Credit Union.

This will make Sound the first credit union in Washington state, and 23rd in the nation, to acquire a bank.

The acquisition of a bank by a credit union is the first of its kind in Washington history. It also could mean that the new financial institution could be the first in Edmonds to tap into the lucrative marijuana market.

Marijuana growing and selling is legal in Washington state, but banks under the charter of the federal government are not allowed to take in accounts for marijuana businesses. Indeed, the feds would consider it money-laundering.

There are two marijuana retailers within Edmonds city limits.

Sound Credit Union is state-chartered in Washington. As such, credit unions, including Sound, are permitted to open accounts for marijuana-related businesses.

Bank of Edmonds  which opened in 1996 and changed its name to Bank of Washington in 2000  provides commercial loans, deposit accounts and other banking services to businesses and individuals at its five branches in Edmonds, Mukilteo, Lynnwood, Everett and Redmond, and a loan production office in Seattle.

The transaction marks the end of the local bank, founded by a group of Edmonds residents including the late John Beck, a former state representative who died in 1997. He was the son of Stephen Beck, who founded Beck’s Funeral Home, along with his wife Martha Lou Beck, in 1952 on Fifth Avenue South.

According to Gary Schmitt, the Bank of Edmonds’ first CEO and now retired in Vancouver, Washington, Beck was the force behind the new bank, which opened at the site of the current Starbucks by the fountain. (After a decade, the bank moved to Third Avenue South and eventually to its current location at Dayton Street and Fifth Avenue South, a new building taking the place of an ampm gas station and mini-market)

“Bank of Edmonds started when there was a turmoil in the banking industry,” Schmitt said. “Wells Fargo was taking over 1st Interstate in a hostile takeover. There were many acquisitions. John told me that Edmonds deserved better, and wanted to make sure Edmonds had local representation in the banking industry. We also had a great location, great staff and great customers.”

Schmitt said the Bank of Washington acquisition is a good deal for shareholders and staff.

Sound Credit Union has 24 full-service branch locations throughout Puget Sound. Sound will maintain its status as a credit union, bringing the Bank of Washington’s team and customers into its business.

The transaction was unanimously approved by the boards of directors of both institutions and is subject to regulatory approval, approval by the shareholders of Washington Bancorp and other customary approvals.

The transaction is anticipated to be completed in the first quarter of 2019. It is anticipated that Bank of Washington shareholders will receive about $6.40 in cash per share, based on the outstanding shares as of the date of the purchase agreement.

The combined company will have about $1.7 billion in assets, $1.3 billion in loans, $1.5 billion in deposits and operate 29 branches throughout King, Pierce, Snohomish and Thurston counties.

Don Clark, Sound Credit Union’s president and CEO, said, “We are excited to announce the acquisition of Bank of Washington’s assets. This combination will help us further expand our footprint in Snohomish and King counties, accelerate our business and mortgage lending efforts, and add great employees. We feel the value and cultures of both companies are very similar, with a strong commitment to customers and the communities in which we serve.”

Marty Steele, Washington Bancorp president and CEO added, “We are enthusiastic about this partnership because of the expanded opportunities it brings to our customers, our employees and our communities. This deal rewards our long-term shareholders who have supported us for many years.