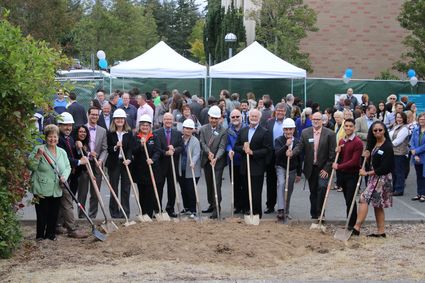 Edmonds Community College celebrated the groundbreaking of its Science, Engineering, and Technology (SET) Building, which is set to open late spring 2020, on Sept. 12.

Singh anticipates that the 70,000-square-foot building will be a regional hub for those who want to pursue degrees in science, technology, engineering and mathematics, ranging from engineering to nursing.

Alumna Tina Rajabi said Edmonds CC’s STEM programs and faculty prepared her to successfully transfer to the University of Washington this fall. She noted that the new SET Building will play a key role in future students’ academic success.

Lynnwood Mayor Nicola Smith said the city has had a long and successful partnership with the college. Smith also has strong ties to Edmonds CC, where she worked for more than 30 years before becoming mayor.

“It’s been a great collaboration so far to get this building to where it is today,” she said. “We’ve been working side by side for years and included the funding for the building in our legislative agenda for many years.”

The Washington State Legislature approved $47.1 million for construction of the SET building, which was one of 25 projects included in the Washington State Board for Community and Technical College’s $338 million budget request for the 2017-19 capital budget.

Project architect Walter Schacht said the building will be along the campus “spine” of original buildings and will create connectivity through the campus.

“There are critical STEM programs that will be located in this building, but I think the college showed a huge amount of foresight and innovation by also putting two floors of multipurpose classrooms to be used by dedicated programs but also by any program on campus,” he said.

Schacht added that this flexibility will allow the building to be resilient in terms of programming for decades to come.

The new building will house allied health, physics, chemistry, engineering, and math classrooms, as well as labs and offices. It will also be LEED gold certified.

“As the director of Advanced Materials at Boeing, I’m looking forward to seeing Edmonds CC students and alumni start and advance their careers in STEM here,” said Edmonds CC Board of Trustees Chair Tia Benson Tolle. “Edmonds CC will play a critical role in training our regional workforce in the coming years.”

For more information, go to edcc.edu/SETBuilding.