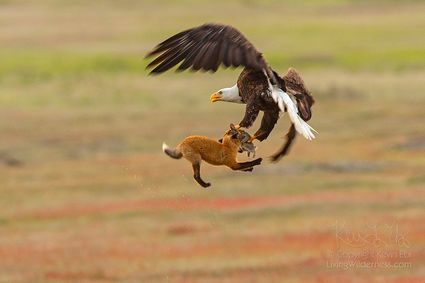 This Kevin Ebi photo went viral and was published worldwide.

When Kevin Ebi trekked up to the San Juans to take pictures of bald eagles in May, he couldn’t have known that a serendipitous encounter with a fox and rabbit would create a viral moment.

As Ebi focused his lens on the eagle, nature sprang into action.

“The eagle had lifted both the fox and the rabbit as much as 20 feet into the air,” Ebi said. “After an eight-second struggle, it freed the fox and flew off with the rabbit.”

Images of the midair drama went viral, appearing in newspapers from Russia to Australia. National Geographic checked in with a story.

The viral moment is part of a free presentation Ebi gives 7:30 p.m. Friday, Sept. 14, when he kicks off the three-day, 2018 Edmonds Bird Fest as the keynote speaker.

“I took all of my images from the incident and stitched them into a slow-motion video,” Ebi said, “which I will share during the presentation.”

Ebi, a Lynnwood resident, documented a year in the lives of Pacific Northwest eagles for a book called “Year of the Eagle,” which demonstrates through photos how eagle families educate their young with life skills.

“I spent three summers observing a bald eagle nest in Kirkland, so I talk about how they grow up and learn to fly. During the presentation, I will actually show a video of a bald eagle’s very first flight.”

Ebi also will cover the behavior of the eagles that winter in the North Cascades, where he’s been photographing them along the Skagit and Nooksack rivers for nearly 20 years, as well as devoting time to talk about bald eagles that summer along Hood Canal.

“It’s a dramatic time of year, when you can see dozens of eagles together feasting on spawned out salmon,” he said.

Ebi said he spends a lot of time taking photos at the Edmonds Marsh.

“While it’s not hard to find great blue herons, I still like to photograph them there, trying to find unique compositions with the marsh grasses. I’ve also spent extensive time photographing ospreys and Caspian terns at Jetty Island in Everett.”

Ebi also did a series of roosting crows in Bothell.

During the fall and winter, up to 16,000 crows roost each night in the wetlands that border the University of Washington-Bothell.

“While crows are an incredibly common bird, seeing 16,000 circle the campus and then land in the trees just after sunset is a thrilling experience,” Ebi said. “Images from that project were exhibited at a gallery in Portland and have been widely published.”

One aspect of photographing nature that Ebi appreciates is the constant change.

“Blooming wildflowers or changing leaves can dramatically change the appearance of a scene from season to season,” he said. “Weather conditions can change a scene from one moment to the next. A young bald eagle can go from being afraid to fly to being a 100 miles from its nest in a matter of a couple months.

“Nature is as alive as we are. It’s constantly changing. Its story is still being written. That’s what I try to capture in my work, and that’s why I called my photography business Living Wilderness.”

With over 250 species of birds, the city of Edmonds has come to be known as a stellar birding area in the Puget Sound. In addition to the marsh, there are many locations to spot all types of birds, including Yost Park, the beaches, the public fishing pier and local Edmonds parks.

More and more people are enjoying birding as a hobby.

And for the past 13 years the Puget Sound Bird Fest has showcased what makes Edmonds such a special place to enjoy this hobby. Hundreds of people from near and far are expected to flock to the three-day festival Friday through Sunday, Sept. 14-16.

The festival seeks to highlight the important role that birds play in the Edmonds ecosystem and economy, from pest control to seed dispersal to tourism. The overarching goal of the festival is to promote local birding, encourage bird-friendly gardening, and educate residents about conservation of bird habitat.

There are things to do at the festival, many of which are free, for all ages and all levels of experience with birding.

The opening speaker on Saturday, Sept. 15, is renowned birder Noah Strycker. In 2015, Strycker became the first human to view over half of the world’s species of birds in a single, yearlong birding trip that took him across the globe.

He shares his incredible (and humorous) experiences at 10:45 a.m. in the Library Plaza Room.

Free indoor activities are all day at Frances Anderson Center, with exhibitors and a variety of presenters and speakers. View a display of photos taken by both amateur and professional photographers, and vote for your favorite.

Take the kids to the kid’s area from 10 a.m. to 3 p.m. to learn about owl pellets, and make nature crafts.

For a list of all of the events and activities, go to www.pugetsoundbirdfest.com/schedule-for-event.