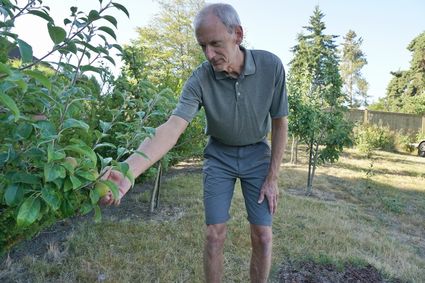 There’s a cidery in your neighborhood. You don’t know it, but right off Ninth Avenue in Edmonds, Steve Kaiser, the brains behind Core Hero Hard Cider, has been brewing hard cider out of his garage for the past couple of years.

One day, while chatting with a friend at the Edmonds Summer Market  where he frequently has a stall  they came across a vendor selling popsicles made of fresh fruit.

“You should make popsicles using your cider!” his friend joked.

Kaiser laughed, but the wheels started turning in his head. Popsicles wouldn’t work. First, popsicles are usually marketed to kids, which wouldn’t be acceptable for an alcoholic product. Second, since they would be made from cider, they’d be expensive.

The product would have to be at a higher price point, more premium. Then something clicked. “A sorbet!” he thought. It was time to go back to the lab.

There were many trials and errors  making a frozen treat with alcohol is tricky. Simply freezing the cider resulted in a gel-like substance with goopy pockets of booze. Kaiser spoke to a milkshake machine manufacturer, figuring they might have something he could use.

The result? A whipped, sticky mess that resembled a meringue pie topping.

Finally, he ended up settling on a labor-intensive process of continuous stirring, which he does at home, in order to ensure a uniform consistency.

The next hurdle was getting his product through regulators. He called the Washington Department of Health. After inquiring about his strange sorbet, the woman on the phone gave a hearty laugh. She had never come across a product like his, but she told him she’d move it up the chain.

After being approved at the local level, Kaiser reached out to the Alcohol and Tobacco Tax and Trade Bureau to get approval at the federal level. The process was much more involved, and required Kaiser to send in samples for lab analysis. His product made it through, and after two years it was finally ready to hit the shelves.

Which raised the next question. Who would take the risk to stock this odd product with about 5.5 percent alcohol? Kaiser contacted high-end grocery stores like PCC and Whole Foods. He held tastings for them and reached out to their regional buyers to make a case.

They were happy to stock his cider; that was a safe bet. Hard cider sorbet was uncharted territory. Through good fortune, Kaiser made a friend at Whole Foods regional and had his sorbet accelerated through the approval process.

He planted an orchard on Lopez Island that will soon bear fruit. Using his marketing expertise, he’s broken down the development of his business into several phases, in order to gradually improve and distribute his product as it gains traction.

A new career in cider

Kaiser is an Edmonds resident and marketer by trade. For the past 35 years, he has worked for many companies, from trendy dot-com startups to healthcare organizations like Swedish Medical Center and UW Medicine.

He enjoys the work he does  marketing is a career that lets him inform the masses about important products and services.

However, over the years he became frustrated by the lack of fulfillment from his work.

“It’s nice to have a job that is hard work, pays well, and can be a challenge, but it might not allow you to do the things you want to do that are more creative,” he said. “Or there’s a lot of bureaucracy, and it can be hard to directly help the consumer.”

He wanted something different. Kaiser was looking for a job that allowed him to express his creativity, take a project from start to finish, and see a smile on the face of his consumer.

Five years ago, an opportunity fell into his lap. As he was catching up with his sister, who lives in Wenatchee, she mentioned there was an orchard nearby that was giving away cider apples by the bushel.

It turned out that Washington State University’s cider research program had a surplus. Kaiser had taken a liking to cider, and figured brewing the apples would be a great opportunity to express his creativity and share his work with friends and family.

Kaiser took the apples home, gathered some recipes, and began to experiment. He tried a range of different processes and ingredients. He brewed everything from a humble plain apple cider to a strange beverage with flavor resembling that of mincemeat pie.

His friends and family were delighted by his efforts, and Kaiser’s passion was ignited.

As he continued to test and taste, another coincidence landed on his plate. A local winery with a cider making branch was seeking out someone to market its products. Kaiser jumped at the opportunity.

It would give him a chance to learn more about the craft of cider brewing, as well as the commercial side of it. As he worked, he found out more and more about the process, from sourcing apple concentrate, to fermentation, bottling and sales.

But the product was a letdown.

Kaiser believed in a product that was pure and wholesome, not from concentrate or made with cheap sweeteners like high fructose corn syrup. He brought in some of his homemade cider for his boss to try.

“He liked it, but he also said there’s no way you could make money selling this,” Kaiser recalled.

Fortunately, Kaiser wasn’t in it for the money. He rented a stand at the Edmonds Summer Market and started peddling his product.