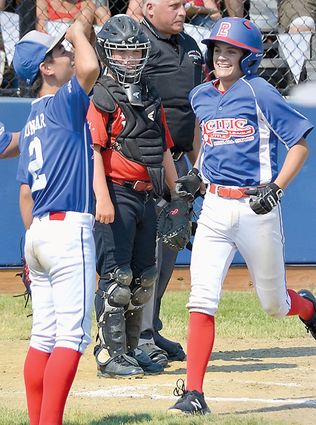 The Pacific Little League 12-year-old all-stars battled to the very end in their final two games at the state tournament.

Needing a victory in one of the two championship contests to advance to the regional tournament, Pacific overcame a 7-2 deficit in game one but eventually lost 7-6 to West Seattle on Saturday, July 28. West Seattle’s victory sent the two teams into a winner-take-all contest the next day.

Pacific fell behind 5-0 but closed to within one run before West Seattle added three late insurance runs to prevail 8-4 on Sunday, July 29, at Tesarik Field in Sedro-Woolley.

West Seattle needed to win both games in order to advance to regionals in San Bernardino, California. Sunday’s loss ended the season for Pacific and its coach Joe Webster, the former longtime head baseball coach at Edmonds-Woodway High School.

“For me the biggest disappointment is that we don’t get to spend any more time together,” Webster said. “They’re just such a great group of kids. I’d take anyone of them into my home if I had to. They’re just outstanding kids. I was looking forward to spending the summer with them.”

Pacific responded with two runs in the third. Adam Alharbi hit a home run and Diego Escandon, who reached first base on an error, later scored on a wild pitch.

In the fourth inning, Pacific’s Eric Fjortoft hit an infield single and then scored on a throwing error, as Pacific cut West Seattle’s lead to 5-3.

Caden Kennelly then led off the fifth inning with a home run to cut West Seattle’s lead to 5-4.

West Seattle, however, countered with three runs in the fifth to extend its lead to 8-4. With one out in the top of the sixth, Alharbi drew a walk. But Pacific’s hopes for a comeback were snuffed out when a hard ground ball to West Seattle’s shortstop resulted in a double play to end the game.

“I still believed to the very end we would get to them,” Webster said.

“It felt like it was one of those games when they hit the ball hard it found a hole,” Webster said. “When we hit it, it found a glove. Credit to them for catching it when we hit it to them. But the last few days we haven’t been able to get that big hit with runners in scoring position we’ve been getting all year long from everybody in our batting order.” 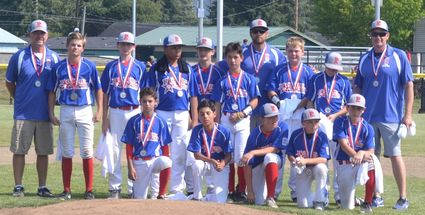 Pacific Little League poses for a photo after taking second place in the state tournament.

Webster wasn’t surprised by his team’s resiliency against West Seattle, who Pacific defeated 8-4 earlier in the tournament.

“We aren’t quitters,” Webster said. “You don’t get this far if you’re a quitter. You’d have gotten beat a long time ago.”

Coaching a 12-year-old all-star team of Little League players was a new experience for Webster and one that he’ll cherish.