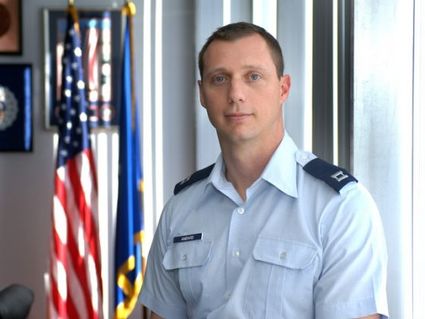 Over seven years ago, Maj. Philip Ambard, a former Edmonds resident, lost his life along with eight others in a mass shooting at the International Airport in Kabul, Afghanistan.

Ambard was one of several local residents honored Monday during Memorial Day services at the Edmonds Cemetery.

When he arrived in the U.S., Ambard did not speak English. Television shows, soap operas in particular, became his English teachers  “All My Children” and “General Hospital” were his favorites. He learned to speak the language of his adopted country without an accent.

School was difficult, and without a doubt he faced many challenges throughout his lifetime. However, with hard work and determination he conquered them all.

In February 1985, while Philip Ambard was a senior in high school and still underage, his mother, on her son’s behalf, filed his petition for naturalization. This was the first step for Philip Ambard to become a U.S. citizen.

He graduated from Shorewood in 1985. Having been told that it would speed up the process to receive his citizenship papers if he joined the military, at the age of 18 he joined the U.S. Air Force. It was to become his career for the remainder of his life.

Enlisting in the Air Force, Ambard was an Airman First Class, then attained the rank of sergeant and, in 2000, became an officer. During his 26 years in the military, he served at several stations, including Holloman Air Force Base in New Mexico, Mountain Home Air Force Base in Idaho, Hill Air Force Base in Utah and at the American Air Base in Bitburg, Germany.

He married in 1988. With his marriage, he became stepfather to three young children. Later, he and his wife would have two more children.

In 2002, he was assigned to the 460th Space Communication Squadron, Buckley Air Force Base, in Aurora, Colorado. In December 2003, he became a member of the teaching staff at the U.S. Air Force Academy Department of Foreign Languages, Colorado Springs, and soon became one of the academy’s most respected officers, as well as a dedicated and hard-working teacher. While serving in the Air Force, he attended night school and received his bachelor’s degree. He didn’t stop there. Continuing his education, he earned his master’s from the University of Colorado at Colorado Springs, and a doctorate from the University of Denver.

Forty-four-year-old Ambard, a 26-year veteran of the Air Force, had never flown a plane, had never been in battle. As an assistant professor at the academy, he taught Spanish and French to young cadets. Ambard actually spoke eight languages. Admired and respected, he held a special place in the hearts of his students.

In the early months of 2011, during the conflict known as Operation Enduring Freedom, Ambard was on a tour of duty with NATO Air Training Command in Afghanistan. He had never been on an assignment in a danger zone before, and thought it would be a benefit in his work to learn firsthand about some of the trials his cadet students would face in the future.

He had volunteered during this conflict to become a NATO advisor in the training of men for the fledgling Afghan Air Force. Ambard had been stationed in Afghanistan, far from his Colorado home and his family for four months.

The Kabul Airport was controlled by the military and was considered one of the better-protected places in Afghanistan. On the morning of April 27, 2011, two dozen people, including Ambard, had gathered for a meeting in a conference room at the airport when suddenly, and without warning a 46-year-old Afghan man, a helicopter pilot in the Afghan Air Force, pulled a pistol from his flight suit and rapidly opened fire, killing Ambard and seven other members of the U.S. Air Force, as well as one civilian contractor. All were Americans.

The shooter, a man Ambard had liked and considered to be a friend, then died himself, either by his own hand or during the subsequent gunfire. After an eight-month investigation by the U.S. Air Force, it was concluded that the shooter acted alone; however, the reason for the attack was never fully understood.

After the tragedy, Ambard’s body was flown home, first to Dover Air Force Base, where his widow was waiting, and then to Colorado. After an impressive military service at the Cadet Chapel, Ambard was buried at the United States Air Force Academy Cemetery in Colorado Springs. Colorado.

At the Air Force Academy in Colorado, this respected and hard-working professor has never been forgotten. In his honor, a year ago, the academy established the Maj. Philip Ambard Conference Room.

Edmonds has also remembered and honored Ambard. His name was added to the veterans’ memorial monument at the Edmonds Cemetery.