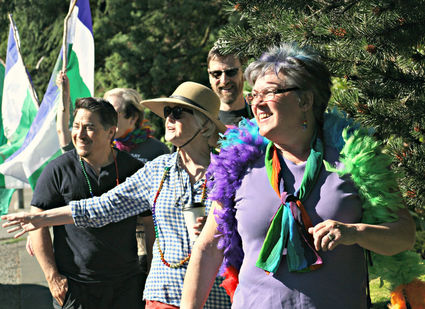 Lori Kunze leads a group of Pride of Edmonds members down Fifth Avenue South on Saturday, June 24, during Pride weekend. They were headed to Pancake Haus to discuss their entry in An Edmonds Kind of 4ths main parade.

Thousands packed the streets of Seattle, San Francisco and many other cities around the country and world on Sunday to celebrate gay pride, a day chosen to commemorate the Stonewall riots of June 28, 1969.

On that date, fed up with baton-wielding police raids targeting New York City’s Stonewall Inn, hundreds demonstrated  some violently  to protest being singled out for persecution due to sexual orientation and gender identity.

Gay pride events are slower in coming to smaller cities such as Edmonds, whose proximity to Seattle hinder efforts to organize full-fledged celebrations when numerous are available a few miles down the road.

But one Edmonds woman is determined to change that.

Lori Kunze, classifieds manager at Beacon Publishing, is among a handful of local gay-rights activists who may one day soon succeed. For now, she is happy with the group of marchers she’s assembled to march in An Edmonds Kind of 4th’s main parade, a group she named Pride of Edmonds.

“I would say that it was easier than trying to organize an entire Edmonds Pride parade,” Kunze said. “Trying to create that size of an event would have been daunting, with permits, registrations, regulations, roadblocks and more. When I asked about such a possibility at City Hall, they suggested that I simply enter the Fourth of July parade. So I did.”

Economic Development and Community Service Director Patrick Doherty said that an event such as a pride parade, or any event not sponsored by the city  events it neither creates nor funds  would require a special event permit, as well as insurance that indemnifies the city.

Doherty is the city’s lead on its Diversity Commission, a nine-member advisory group created to promote an environment that accepts, celebrates and appreciates diversity within the community.

“The city has to approve all public events that involve rights-of-way or city facilities/personnel,” he said. “So, yes, we would have to approve (a gay pride) parade. That does not mean that we exercise judgment over which parades to approve or not  that would violate First Amendment rights.

“And we do have to find a way to accommodate all such reasonable requests, although we have the legal right to suggest routing, timing, which closures to approve, and how much city staff to involve.”

Doherty added that the city often does not allow street closures for non-city-sponsored events, but, as he told Kunze, it’s not a hard-and-fast rule and would have to go through a review process.

For example, hundreds marched Feb. 25 as part of a rally in downtown Edmonds to support immigrant refugees and Muslims, which shut down streets and required motorcycle police officers for traffic enforcement.

The Diversity Commission will be represented in the parade this year, as it was last year, and invites the community to join its Accept-Respect-Celebrate Diversity entry. Last year, the commission had a contingent in the parade that included several different subsets, including LGBTQ people and groups.

At this time, Doherty said, the commission has no plans to produce or sponsor other parades.

“It does become difficult to choose a single group or cohort to organize an event for, since obviously there is such a wealth of different groups that could potentially wish to be celebrated similarly,” he said.

“If a stand-alone group wished to produce a parade, rally or event, the Diversity Commission would certainly be interested in considering the opportunity to provide support or visibility  or even potentially a grant from its new grants program.”

“Anyone is allowed to march in the parade,” he said. “We reserve the right to refuse any group for reasons, including but not limited to discriminatory messages, offensive materials, inappropriate display/dress, or other reason that will make this family friendly community event offend or exclude anyone.”

Kunze said Pride of Edmonds is meant to be a patriotic and “pride-full” group, not a political statement.

Some of the marchers are individuals, some are couples or local families, others represent other LGBTQ groups. They include Indivisible Edmonds, Rainbow Warriors from Edmonds-Woodway High School, Sisters of Perpetual Indulgence, Richmond Beach United Church of Christ, Edmonds Unitarian Universalist Congregation, and PFLAG groups from Everett and north Seattle.

Kunze, a straight woman, said she’s been an ally to the LGBTQ community since childhood.

“I was raised in a very liberal family and faith, and my friends have always reflected a great deal of diversity,” she said. “For years I've facilitated an LGBTQ-friendly sexuality education course in my church, both here in Edmonds and in my home state of Michigan.

“I actively fought for marriage equality. I'm a member of the Seattle Women's Chorus, who I march with in the Seattle Pride parade. And lastly, and most lovingly, I am the wife to a bisexual man and stepmother to a straight son, whose mother is married to a woman.”

She also facilitates a group called QUUE, Queer Unitarian Universalists of Edmonds, which meets the last Saturday of each month for breakfast at Pancake Haus in Edmonds.

On Sunday, Feb. 12, Kunze and about 170 people gathered  holding rainbow and U.S. flags  to demonstrate outside the church.

“We wanted to show that the majority of Edmonds citizens do support LGBTQ people and churches welcoming to rainbow families,” she said. “Then there was a little dust-up within the Edmonds community about a Beacon poll asking readers if they support churches who welcome the gay community.

“The results showed that a vast majority of residents do, and yet some took offense that the question was even asked. But out of that conversation, I know new friendships have formed, because people were willing to listen to each other and discover that they had more than they thought in common with respect to the issue of inclusion and acceptance and supporting diversity.”

Kunze said Pride of Edmonds has two goals: “To show a positive attitude and perspective supportive of the LGBTQ community, and to support patriotism, emphasizing that LGBTQ pride is not antithetical to American pride.”