Pair walk away after single-engine plane crash in Mukilteo 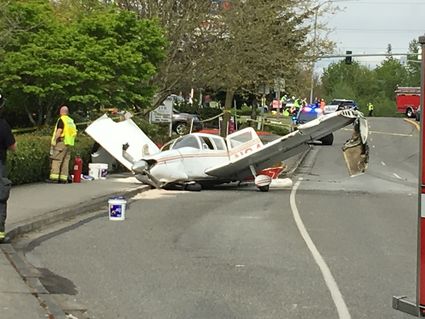 A single engine Piper Cherokee rests against the curb on Harbour Pointe Boulevard South on Tuesday after its engine quit and the pilot tried to land on the street.

An Oregon man and his passenger walked away from a plane crash in Mukilteo Tuesday, counting their blessings.

The 30-year-old pilot told investigators he was taking off in his single-engine Piper Cherokee from Paine Field at about 3:30 p.m. and reached about 500 feet altitude when the engine quit.

According to Mukilteo Police spokesman Myron Travis, the pilot tried unsuccessfully to restart the engine, so he spotted Harbour Pointe Boulevard Southwest where he thought it was clear enough of traffic to try to set the plane down.

However, while descending, the plane clipped power lines and...