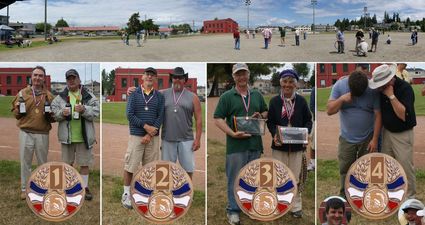 The three-year-old Edmonds Petanque Club is steadily growing in membership and influence in Edmonds. The club more than doubled its membership from the first year, and now has 57 active members and well over 100 friends on its mailing list.

As a thank-you to its members, a “Club Members Only Tournament” was held on Sunday, June 9.

Members of the club have developed a computer program that helped manage team assignments in the competition and keep records of each game automatically. This program is the first of its kind in Edmonds to keep track of various teams as they progress to the tournament championship.

Other petanque clubs nationwide could utilize the computer program since it is a vast improvement over any other scoring method currently in use.

With 14 competing teams, the tournament was a well-attended Edmonds-Kind-of-Day event. The weather was Goldilocks weather, not too hot and not too cold.

Club President Michelle Martin organized a fabulous potluck lunch. Merchants in town sponsored the event, and the club wishes to acknowledge and thank Arista Wine Cellars, Walnut Street Coffee, and the Edmonds Bakery for providing supplies and prizes for the tournament.

The game of Petanque requires the player to toss a boule (steel ball) toward a small target ball called a cochonnet or jack. While the game is competitive and challenging, it can be played by people of all ages very successfully.

Almost every Saturday and Sunday in all kinds of weather, players gather informally at the three courts in the Edmonds Civic Center Playfield on 6th Ave N., just South of the Edmonds Boys and Girls Club.

Club members play nearly every Wednesday afternoon, as well. Everyone is invited.

The club has boules to loan and friendly players who cheerfully take the time to welcome and teach anyone who wishes to learn how to play.