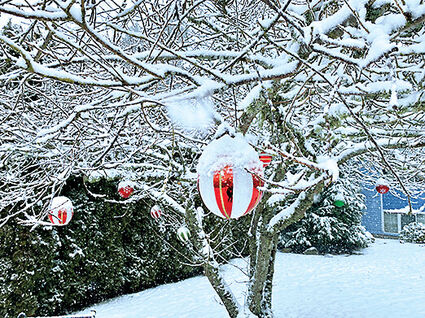 Oh, the weather outside is frightful

But the fire is so delightful

And since we've no place to go

Like the song says, if the weather has to be frightful, at least let it snow!

There is something inherently comforting about snow.

Walking through your neighborhood or down a busy city street, the uniformity of color (or lack thereof) creates a calm. You cannot help but smile at bunches of pillowy snow creating new shapes on tree limbs, especially with evergreen needles poking through.

If your backyard was not winterized and weeded at the end of fall, the snow will cover that. The driveway with a few cracks or uneven spots suddenly appears flawless. The small patio to your apartment that may not have been power washed now looks spotless.

When we were young, snow meant no school; snow meant that it was OK to play outside instead of doing chores or homework. Sledding down a street that your parents usually say if off-limits is exhilarating.

You don't have to be a kid to love taking the dog for a walk in the snow, something that now involves attempting snowball fetching and lots of tail wagging. Snowball fights or just general frolicking in the snow is, well, fun!

A pristine and untouched layer of millions and millions of snowflakes seems to erase all that is not quite right with the world, or at least mask it.

Those of us lucky enough to go into this holiday season enjoying the bounty of gifts and food, the love of family near and far, the warmth of our favorite and familiar decorations, and the snow, especially the snow, must also remember those without those things.

From devastated Ukrainians celebrating a Christmas without war just a year ago, to a neighbor who can no longer afford rent, or a teenager forced to leave home – they can experience that snow as life-threatening.

From the families who do not have enough to eat because work hours were cut or wages cannot keep up with costs, there are so many who cannot rejoice for the holidays with abandon.

All of our winter holidays celebrate a type of renewal, whether it be birth or the Nativity, the victory of light over darkness, unity of purpose, and all prioritize the honor in and obligation of giving, of sharing joy, and of caring for others.

Those with plenty carry even more of this responsibility since we are fortunate enough to be on the inside looking out at that beautiful and icy snow.

Another of my favorite Christmas carols says it well...

In our world of plenty, we can spread a smile of joy

Throw your arms around the world at Christmas time

But say a prayer, pray for the other ones

At Christmas time, it's hard, but when you're having fun

There's a world outside your window, and it's a world of dread and fear

Tonite thank God it's them ... instead of you.