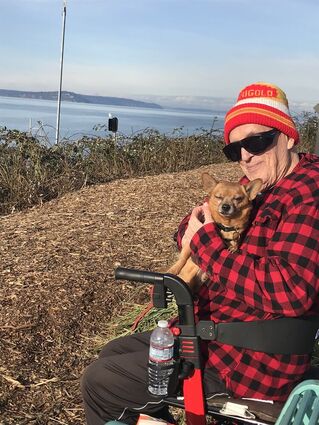 Jack was born to Gertrude and Elon Travis in Waltham, Massachusetts, on Feb.14, 1933. They moved to Seattle in 1947. Jack served in the Navy from 1951-1955 as a deep-sea diver, doing underwater demolition and salvage.

After the Navy, Jack had a 40-year career in the grocery business, working at Thriftway as a member of the retail clerks union. He married the love of his life, Harriet, in 1961, and they lived their 61 years together in Shoreline and the last 25 years in Edmonds.

After retirement, he enjoyed traveling, dog walking, dog sitting, and spending time with family. Jack was truly one of a kind. For him, life was never about "stuff" – it was about memories.

In his later years, he suffered from dementia but didn't let that diminish his spirit. Right up until his death, he was selling squirrel picnic tables across the street from the post office.

During COVID, he sold over 400 tables, making a lot of friends, including the dogs who he always had a treat for. There will never be another Jack. Our family is full of gratitude for a man who we loved, who could have had a lingering drawn-out end of life but who was taken from us suddenly. His terms.

A perfect script for a well-lived life. A memorial service will be held at a later date to be announced.