By Byron Wilkes
For the Beacon

The Edmonds Theater on Main Street celebrates its 100th anniversary in 2023.

It is easy to imagine that Thomas and Helen Berry had the belief that "if we build it they will come" in 1923 when they announced they were going to build a grand Art Deco theater across Main Street in Edmonds from their existing Princess Theater.

Similar to the classic line in the 1989 movie "The Field Of Dreams," their vision came true.

In the age of video, then DVD, and now streaming, today's Edmonds Theater is a survivor. In honor of its 100th anniversary in 2023, here is some history of the venue.

The Berrys had acquired a small theater in August 1921 and renamed it The Princess Theater. The initial theater was, however, the brainchild of F.A. Fourtner – a future mayor of Edmonds – who purchased the Mothershead and Lemley Hardware Company along with their building in 1913 so he could convert it into a movie theater.

The hardware supplies were sold to the Edmonds Hardware company and the building was renovated and served as a meeting place until the summer of 1916. The Union Theater then formally opened, advertising regular shows that summer.

Over the next six years, during the World War I era, the theater was sold numerous times and functioned under different names, including the Union Theater, The Edmonds Theater, The Vivian Theater Group, and The Acme Theater, to name a few.

It wasn't until the Berrys purchased the theater in 1921 that the theater operated under the same name and ownership for consecutive years.

1923: The construction and grand opening

With the announcement of the new theater, construction started two weeks later directly across the street from the original theater. By the end of October, the building was nearing completion and a grand opening was announced for Nov. 2, 1923.

The grand-opening event occurred with much fanfare with local dignitaries speaking and musical groups playing. A tour of the plush furnishings of the theater, including its spacious lobby, balcony, large screen, and state-of-the art lighting with dimmer capabilities, was available to the patrons.

Note: The original building also housed the Edmonds Barbershop and Surplus Army Goods store on either side of the lobby; both had moved in prior to the grand opening.

Over the next 30 years, the theater ran successfully under the ownership of the Berrys and with assistance from Mr. and Mrs. Lionel Brown. Mrs. Brown was the Berrys' daughter.

Despite the Berrys' success, there were definitely some ups and downs. Here are a few of them:

• On April 11, 1928, a fire broke out in the backroom of the Edmonds Club across the street from the theater – the recent site of Bop NBurger. The fire was intense – flames jumped across the street, burning the top of the theater and surrounding buildings until firefighters from the Greenwood District could help extinguish it.

• In August 1929, the first "talking" picture shown in Edmonds was featured at The Princess Theater. "Broadway Melody" was screened for a packed house.

• In 1932, due to the Depression, the price of a ticket was reduced to 25 cents from the 35 cents established with the first talking films.

• In January 1935, the temperature dropped to 11 degrees and the townspeople awoke to 2 feet of snow. When the snow melted, the water overflowed the inadequate sewer systems, causing major flooding. The water was so deep that it washed away the billboards on the sides and front of the theater.

• In March 1938, major improvements were made to the theater with the installation of new seats, carpets, projection lamps, and sound equipment.

• Sadly, both Thomas Berry (May 1940) and Helen Berry (February 1941) passed away. Mr. and Mrs. Lionel Brown took over sole ownership of the theater.

• In March 1941, "Gone With the Wind" was shown at The Princess Theater. It was possibly the most famous movie of its era.

• In April 1943, a severe lightning and thunderstorm struck Edmonds. It brought rain and hail as never seen before, resulting in massive flooding – with Fifth and Main becoming a lake. The fire department had to be called in to pump out water from the theater's furnace room.

• Throughout the World War II years, the theater became a major civic meeting place. War bonds were sold, and newsreels from the front were shown to provide critical news on the war effort.

• In February 1948, alterations were made to the theater, including removing the beauty shop in the lobby and adding a refreshment stand.

• In 1950, the theater added the latest type of screen and improved sound equipment.

In July 1952, Mr. and Mrs. Lionel Brown – after being with the Princess Theater for 31 years – sold the theater to J.B. (Buck) Giezentanner, who had owned and operated theaters and drive-ins previously in Idaho and Oregon.

In a wonderful article published July 14, 2011, in the Edmonds Beacon, Bill Giezentanner – the son of owner – recounted what it was like growing up and working in The Princess Theater alongside his father and mother (Velma) during the 1950s and early '60s. Read the article: bit.ly/3YkKBgf.

In a time when television was just emerging, he tells of his job as a 9-year-old turning up the seats after each of the double feature showings, picking up candy wrappers and scraping up gum. He was also allowed to keep any loose change he found.

He writes of how the theater had twin cameras in the projection room so that they could continuously show the movie using reels of film on the two projectors. Each reel contained 20 minutes of film, so the reels had to be changed several times during a showing.

He recounts that tickets were 75 cents, 25 cents for children under 12. Candy was available at 5 or 10 cents, and popcorn and pop were available for a dime.

In 1965, Buck Giezentanner sold the theater to Jim Selvidge, who also owned the Ridgemont Theater in Seattle. The Princess Theater was then renamed The Edgemont and, similar to the Ridgemont, it primarily offered foreign films for viewing for the next four years.

In 1969, Jim and Sally Kneist, recognized as community leaders, purchased the theater from Jim Selvidge. The operations were truly a family affair. The Kneists' eight children worked in the theater alongside their parents to help pay for their school expenses.

In 1975, ownership then moved to two couples active in the Edmonds art and drama scene. Couples Wade and Jan James and Earl and Nann Prebezac, also instrumental in the Driftwood Players and Driftwood Theater (now the Wade James Theater), took over the operations of the movie theater.

In 1978, Harvard Exit theater owner in Seattle Jim O'Steen purchased the theater from the James and Prebezac families after Wade James' death. Unfortunately, O'Steen's health took a turn for the worse and he sold the theater a year later to Jacques Mayo, an Edmonds dentist and community leader.

Mayo at that point renamed the Theater "The Edmonds Theater" in remembrance of a time long ago.

1979 to current day: The Edmonds Theater

Initially, Jacques Mayo owned the building but did not run the theater business. Prior to 1984, the space was known as the Edmonds Rock and Roll Theater, showing primarily art and cult films while the stage was used for concerts by local punk rock bands and other entertainers of the day.

In 1984, Mayo realized that the art film business was failing, so he assumed control of the theater himself and began to show second-run movies – with admission being only $1. According to Mayo's son, "Footloose" was the first film shown under Jacques' leadership.

He also rented the same space for an all-day series of "travel festival" classes, which he continues to this day. Steves, however, needed to make sure all of his attendees were out before the first film showing occurred.

As time went by, Jacques Mayo realized the building and theater were a valuable part of Edmonds' history. With that understanding and vision, he invested over $175,000 in early 1999 to restore the theater back to its original Art Deco style. The theater was closed for about a month in January and February of 1999 for renovations.

Mayo sadly passed away in 2009, but his children continue to own and maintain the Edmonds Theater today. With the hiring of Robert Rine as general manager in 1989, the theater had wonderful management for 20 years, from 1989 to 2009.

From 2009 until 2014, J. Sherman ran the theater as general manager. In 2014, the Mayo family realized they needed further assistance beyond a general manager and hired Chris Mayes to manage all parts of the business operations.

In 2015, Gary Hoskins, a long-time Edmonds resident and theater patron, joined the theater. Today, Gary is the acting manager, working alongside Mayes on the theater's daily operations. 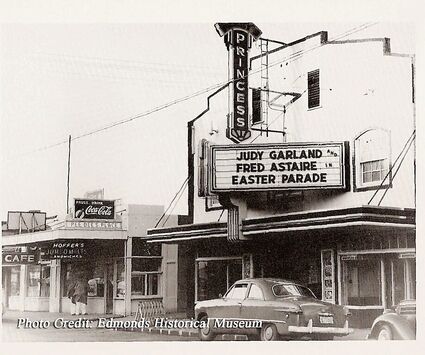 The Princess Theater in the late 1940s.

As we approach the new year, The Edmonds Theater will be entering its 100th year in the same location. It is one of the few remaining grand old theaters and truly an Edmonds gem. Let's hope that we can preserve it for another one hundred years through community support.

Edmonds resident Byron Wilkes graduated from Seattle Pacific University and has an MBA from Cornell University. He thanks the Edmonds Historical Museum and Edmonds, Lynnwood, and Everett libraries for their assistance in researching and providing access to valuable information.

He also acknowledges Mr. and Mrs. Sam Spencer for their assistance in researching the 1960s-1970s ownership transitions and Stephanie Mayo for her clarification and verification of the Mayos' involvement over the past two decades.