By Chris Trujillo
For the Beacon

Edmonds Creative District back on track 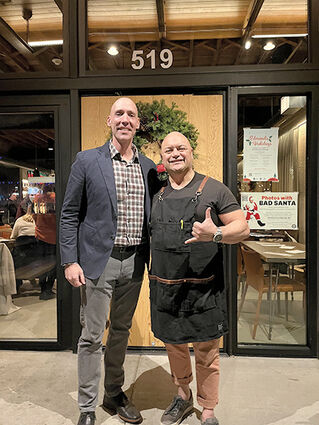 More than 150 Edmonds residents attended the second Creative District update hosted by the Edmonds Chamber of Commerce on Tuesday, Dec. 6, at Leftcraft. The first after-hours update was held in October and was also attended by more than 150 residents.

Edmonds was the first Creative District chosen in the state by Gov. Jay Inslee in November 2018. A Creative District is a concentration of artists and creative professionals that drives social and economic vitality.

Aside from generating a more robust economy, the District also allows for more events, celebrations, and art showings. Since 2019, 13 other Washington cities have received the designation.

"It's not a mistake that Edmonds was the first Creative District in the state," Director of Economic Development Todd Tatum said.

"This community of ours has been building and building to be this purposeful. It's just no surprise we are the first. Edmonds is a great place to show people how this is done. It made sense that we were the perfect place."

There is a big difference in the City in charge of the Creative District, said Tatum.

"What makes us different is that a lot of the other Creative Districts aren't led by their city," he said. "They usually are run by volunteer groups. They have to rely on people to find it in their hectic schedules to arrange meetings and other activities in their districts.

"So, it shows that our City puts a real commitment to our district. We have an arts program manager and staff in that program. We have an economic director. The City puts our efforts toward being a creative district, and that's a big help.

"That's probably why we were selected as the first district in the state. With our city running It, it allows the process to go a little bit faster than trying to get a bunch of volunteers together in their spare time."

Tatum said that the City created a logo in 2019 and started a branding campaign. But the pandemic hit, and Edmonds focused on keeping businesses open. In 2021 and 2022, Edmonds established a coherent brand to get it out to the region so that it would be in people's minds when they think about the arts and culture.

For 2023, Tatum hopes to start adding more creative businesses while increasing the conversation about the District's importance.

"We really need to get a strong positioning statement together," he said. "We have to think about marketing territories and getting a coherent message out so that it can really resonate with the people. There are 13 districts (in the state) out there, and I believe the power is in the quantities because when you think of our 100 or 200 creative businesses here – putting them together allows people to think about it in a different way."

The Edmonds Creative District has become so popular that it has attracted other businesses to the area. One such business is the popular West Seattle pizza establishment Moto Pizza. It's so popular that the craft pizza sells out months in advance.

Once Moto owner Lee Kindle heard about the Creative District, he knew Edmonds was a special place. For him, community and togetherness are the critical pieces that make up a successful business.

"Creative Districts is something very important to me," Kindle said. "This community really buys into it. It's a great place where the community looks out for each other. They buy into the idea that we are one. I have always been supported by community in everything I do.

"When I made mistakes, I had community to catch me and hold me up. Now I want to be in that community to help the younger generation and to help my fellow community. I really think that is the answer to everything. As things get crazy, I think it's more important to bind that together."

According to the Edmonds Chamber of Commerce, Moto Pizza could be open in early January.