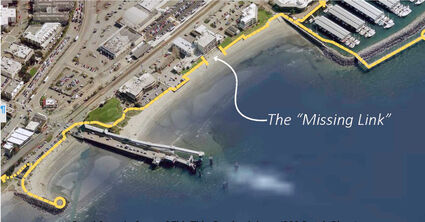 The City of Edmonds has announced a favorable decision from Millie M. Judge of Snohomish County Superior Court regarding the completion of the Edmonds Waterfront public walkway that for decades has been cut off in front of the Ebb Tide condominium building.

The case, which has been highly contested since 2017, involved numerous summary, partial summary, discovery and evidentiary motions, many depositions, and culminated in a four-day trial.

The City was represented by contract City Attorney Jeff Taraday, attorney Beth Ford, and others on the City's legal team.

"Residents of Edmonds, as well as visitors, will greatly benefit from this decision as we can now move ahead with building this missing piece of the Edmonds Waterfront Walkway. I would especially like to thank our City Attorney, Jeff Taraday, and his team, for their great trial work in this case."

Called the "missing link" by City officials, this court decision will allow City Parks and Recreation staff to commission further design work, seek critical grants, and move onto construction of this final piece of the waterfront walkway from Brackett's Landing North to Marina Beach Park, which was originally conceived in 1977.

This will ensure that all individuals, including those with mobility challenges and those pushing strollers, can safely enjoy the full extent of the Edmonds central waterfront.

Completion of this section of the walkway will create a new accessible route across the Ebb Tide property, support efforts to keep dogs off the beach, and has been recognized as a high priority by residents participating in the development of the 2022 Parks, Recreation, and Open Space (PROS) plan.

This important project is part of the City's Capital Improvement Plan, with design and construction anticipated in 2024 and 2025.

In addition to consulting regarding final design details, the City will continue to work with the Ebb Tide ownership to seek agreement regarding any operational concerns across this new piece of the public walkway.