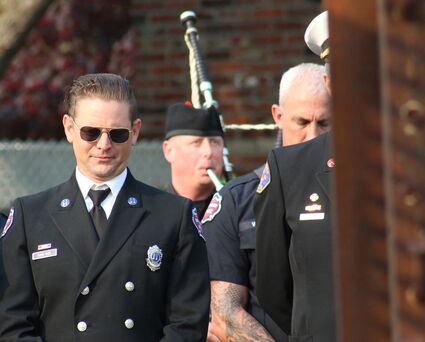 South County Union Firefighters Local 1828 hosted the annual ceremony Sept. 11 at 9:11 a.m. at the Fallen Firefighter Memorial park to remember and honor the victims of the World Trade Center, the Pentagon, and those who lost their lives in the crash of Flight 93 near Shanksville, Pennsylvania.

The program featured a brief presentation, posting of the colors by the South County Fire Honor Guard, a bag pipe performance and “Taps” performed by bugler and retired Edmonds Police Officer Debbie Dawson. 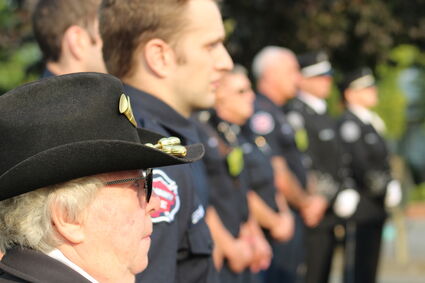 Serving as the backdrop was the 9/11 Memorial, built around a 1-ton beam recovered from the collapsed World Trade Center. The beam is supported by two stainless steel towers above a pentagonal foundation.

Flanking the beam are two walls of glass tiles honoring each of the nearly 3,000 people killed, including 343 firefighters, 60 police and 10 emergency medical services workers.