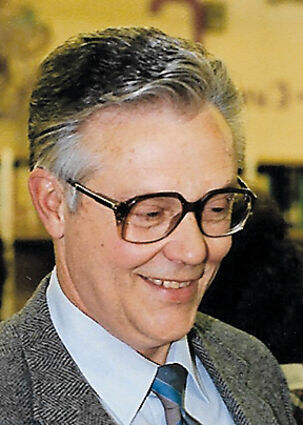 Kenneth Henry Eric Schaefer, age 89, died on May 29, 2022. In 1997, he moved to Centralia from Lynnwood to be with his partner, Joyce M. Butkus. They later lived in the Stillwaters Estates Retirement Community in Centralia.

Ken and Joyce Rice were teenage sweethearts in Kelso, living across the street from each other. When Ken went off to college, they drifted apart. Each married other people and had long marriages. Nearly 50 years later, they met again and found happiness in "the second time around."

Ken was born to Walter and Clara Buschmeyer Schaefer on July 15, 1932, in the small farming community of Blackburn, Missouri. He attended elementary school in Higginsville, Missouri, and junior high school in Sugar Creek, near Kansas City.

His father found better and more regular work in the state of Washington during WWII, so the family moved to Kelso in 1942.

He taught elementary grades in Olympia, overseas in Germany, Shoreline, and finally in Edmonds. He was an elementary principal during his last 20 years, retiring in 1986.

Just prior to teaching in Germany, Ken married Lindsay Ann Gould, of Seattle. Upon their return, they built a home in the Mukilteo/Lynnwood area. They had two sons ,and each son had two sons. The oldest grandson now has two sons. Ken and Lindy later divorced.

Ken had many interests. He especially enjoyed hiking, fishing with his CREEPS buddies, gardening, photography, woodworking, and flying. He was happy to say that he had flown light airplanes for 50 years.

At different times he owned a Meyers open-cockpit biplane, an Aeronca Chief and several Cessnas. Both of his sons also became pilots. It has been a pleasure watching his sons, his grandsons, and now his great-grandsons grow and develop.

A family memorial time is planned. Ken's ashes will be placed in Mountain View Cemetery in Centralia.