A road trip, and a still-missing photo | History Files 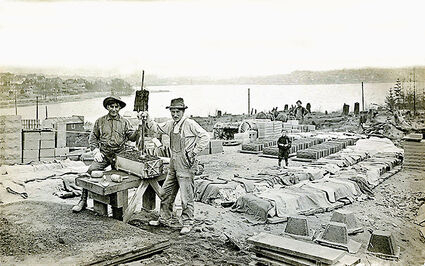 Where was this photo of Lake Union bricks taken? No one knows for sure.

It was nearly a three-hour drive from Edmonds to Issaquah to Port Orchard. Later in the day, I reversed the route to come home.

Why would I do that? In Port Orchard there were photographs of Alpine, Washington, when Alpine was in its prime. In Issaquah, Teresa Anderson has her portable scanner, and her considerable scanning skills, which far exceed mine.

So I started my morning driving to Issaquah. I cleared the back end of my Subaru so Teresa could bring everything she needed. The process closely resembled packing a covered wagon for the long trek on the Oregon Trail.

We set off to Port Orchard, which included navigating Tacoma. I can assure everyone that they are still "improving" the Tacoma merge. We took Highway 16 across the 70-year-old westbound (officially northbound) of the two Narrows Bridges.

The oldest sister of the bridges, Galloping Gertie, remains on the bottom of the Narrows, where it collapsed 82 years ago.

Eventually we neared Port Orchard, stopped for a quick burger at Burger King, and proceeded through back roads to our destination. Once there. we could see immediately that the trip was worthwhile.

Hundreds of photos awaited us.

There were also six of what was first Nippon, then Alpine Lumber Company's annual Thanksgiving dinner and year-end reports, at least two not yet in the possession of a museum. There were also three of the for photos taken by Lee Pickett in Alpine July 4, 1918.

We have the same three photos. It's Lee Pickett's elusive fourth photo from that day that still remains hidden in the mists of time.

I learned from the owner of the photos what she knew about her grandfather and his family living in Alpine in the teens and 1920s as depicted in the photos, most of which I had never seen before.

My job was to identify any individuals and locations from my knowledge of Alpine's history. Meanwhile, Teresa efficiently scanned away for several hours, and decided that some items needed to return to Issaquah for additional work.

Among the photos was a very interesting photo that was clearly NOT Alpine. In the background of the photo is a substantial body of water. No such body of water exists near Alpine.

The men in the photo were tamping concrete into a form to create bricks. After sharing the photo with a number of Puget Sound-area historians and history aficionados, it was decided that the bricks were foundation bricks.

One Queen Anne-based historian said that he'd been waiting eons to see this photo. He knew the process by which the bricks were made, but he had never found a photo of the process in action.

Here we had the real deal.

Then the question: Where was the photo taken? My initial opinion was that the location was Lake Union, something over 100 years ago. My guess was that we were looking southwest from near where Ivar's Salmon House is now. Other opinions were elsewhere on Lake Union, possibly Lake Washington near Sand Point or Kenmore, or maybe even Puget Sound.

Suggestions and photos of possible locations were presented. In my opinion, the most likely turned out to be Lake Union, but not the location I'd first believed. The photo was obviously more than 100 years old, and probably taken before there was a ship canal in Seattle.

The next weekend I drove to Queen Anne to look at more photos – this time photos and keepsakes that had been accumulated by the late Mary Daheim. Teresa met me there. North Queen Anne is very close to Fremont. We went to the suggested location of the brick photo and looked at the view.

The area is much more urban than it was 100 years ago, and it wasn't possible to get to the exact location, but we decided that it did look like the location of the long-ago photo. We still don't know any more than that, and a final resolution is still in the future, but it is a fun exercise from a group of photos on a totally different theme.

We found one more thing there near the Fremont Bridge – old railroad tracks. The line that Northern Pacific Railway was built in 1911 to service Lake Union businesses is still there.

The last train ran more than 30 years ago, and the tracks stand on top of rotting pilings, but this vestige of history is still there.

It was a pleasant bonus for two weekends of traveling all over western Washington in search of history.