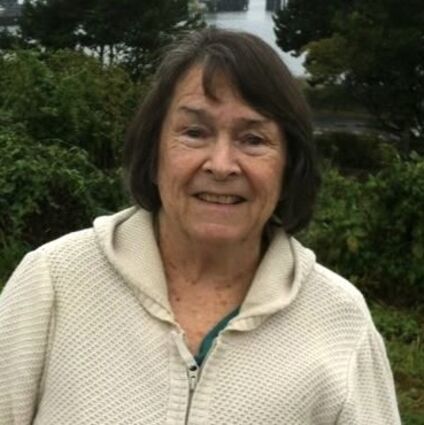 Gillian Hall of Edmonds passed away on Mother's Day, May 8, 2022, at the age of 83. Gillian was born on June 1, 1938, in the mountain resort town of Murree, India, to British parents. Her father's career with the British Foreign Office led to her growing up in India, England, Iran, Afghanistan, Belgian Congo, and Cambodia.

While in Cambodia she met and married Donald E. Soergel, who was there working for the United States Information Agency, with whom she had three children. During their marriage they lived in Virginia, Taiwan, and Maryland. In the 1970s she relocated, with her children, to Santa Barbara, California.

In the 1980s she moved to Edmonds to be near her daughter and grandson.

After her son Brian moved to Edmonds with his wife and daughters, she loved nothing more than spending time with her children and grandchildren. She also made frequent trips to Florida to spend time with her oldest son, Matthew, and his wife and children, where she enjoyed relaxing walks on the beach and napping in the dunes.

She loved living in Edmonds, often walking along the waterfront and downtown. After retiring, she enjoyed spending time with her friends at the Edmonds Senior Center, taking jazzercise classes or having lunches and outings with her friends.

She was very friendly, and would strike up a conversation with almost everyone she encountered. She held on to her British accent, loved "Masterpiece Theater," adored British royalty, and always had time for a spot of tea. She was devoted to her cats; she called them her "babies."

Gillian was preceded in death by her parents, Matthew and Aileen Briar; her sister Jean Shemeld and brother Peter Briar; her sister and best friend, Shirley Mulford, who passed away just a month before her; and her infant son, who died at birth.

Her family would like to thank everyone at Church Creek Estates Adult Family Home in Stanwood for the love and compassion they showed our mother during the almost three years she lived with them. You welcomed our sweet mother into your home and loved her as we do. Words cannot express our gratitude.

There will be a private memorial for Gillian later this summer.

Gillian was such a gentle and lovely woman. I always enjoyed my visits with her and I think of her often. I'm very sorry for the family's loss.