By Jasper Willson
For the Beacon 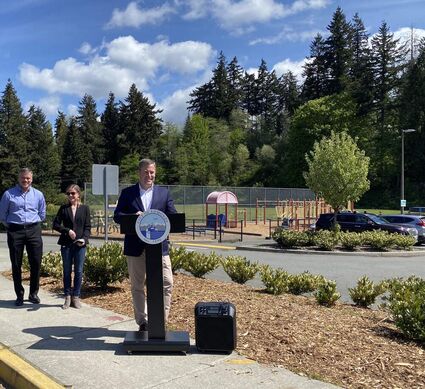 He told about plans to provide more funding to the pedestrian safety fund, build more sidewalks, and create more education around street safety. The announcement was in response to a teenager and child being hit while crossing 220th Street SW in late April.

"The city of Edmonds is committed to eliminating all traffic fatalities and severe injuries, while increasing the safe and healthy and equitable travel for all," Nelson said at a news conference at Sherwood Elementary School.

Streets make up 77% of Edmonds public space, Nelson said. Currently though, about half of Edmonds' streets lack sidewalks. Nelson said he is committed to redesigning streets to put pedestrian safety first.

Edmonds' approach to working on this will be multifaceted. One component will be education, with a focus on education for drivers. There are also plans to partner with Edmonds schools on bike and pedestrian safety.

City departments will form a Complete Street Steering Committee to check every capital project for how they will optimize pedestrian safety. The committee will review collision reports quarterly. The data collected through all of these projects will be published on a safe streets dashboard online.

One proposed project is to make a City code that requires sidewalk construction for private development, Nelson said. This would contribute to the city's goal of more sidewalks in town.

At 220th Street SW, where the children were hit (the both were OK), the mayor hopes to install rapid flashlight beacons to help pedestrians safely cross. The city also hopes to install some landscape medians before that intersection. The media will protect people while also slowing down vehicles, Nelson said.

The city will also implement school zone speeding cameras. The money gathered from use of these cameras will fund additional safety improvements for pedestrians, Nelson said.

"It's going to help us address the complaints and change driver behavior," he said.

The goal is to see 20% more people walking in neighborhood districts, director of Planning and Development Susan McLaughlin said.

Specific neighborhood districts will be chosen and tested annually to look for this increase.

"Our streets," said Nelson, "need to be designed to balance the needs of all users, and prioritize especially the ones that are most vulnerable."