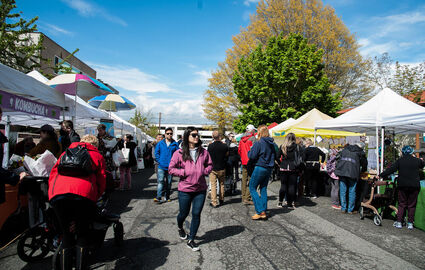 The Summer Market kicked off May 7 in Edmonds.

Saturday, May 7, was not a summer day. In fact, summer is more than a month away and May 7, in fact, was a pretty crummy weather day. (Sunday, however, was glorious.)

Still, the Edmonds Summer Market opened its 29th season on that date, more than a month earlier than ever.

As savvy market-goers, know, the Edmonds Historical Museum and the Edmonds-South Snohomish County Historical Society – which jointly put on the event – decided to combine the earlier Garden Market and Summer Market.

Now, it just made sense to simply start the latter market earlier, as it's one of the most popular in western Washington.

Saturday's debut was no different, even with the cloudy and damp skies mixes with brief sunbreaks. People came by.

"We decided to expand the Summer Market dates this year based on requests from our market patrons and from our vendors," Dave Teitzel, Summer Market committee chair for 2022, said earlier this year.

With the City-sponsored Holiday, Winter, and Uptown markets, residents are guaranteed at least one farmers market once a month.

– Of the more than 90 vendors on opening day, 10 were Edmonds-based small businesses.

_ Dogs on leashes are now allowed.

On Saturday, a volunteer booth was set up on the Historical Museum's Plaza, staffed by volunteers, ready to chat with any shoppers/residents about how to get involved in the market as a volunteer.

"We have plenty of opportunities," said Summer Market manager Christina Martin, "and would love to welcome more Edmonders into the Market Family."

As usual, Edmonds In Bloom offered its traditional Mother's Day planting event for children at Centennial Plaza. It gave kids the opportunity to create floral designs in a beach pail for Mother's Day. Volunteers assisted kids as they selected pails, applied stickers, and selected their flowers for planting.

The Kids Plant for Mother's Day booth was in the center of the market on Bell Street and Fifth Avenue North. A donation of $10 was recommended to offset the cost of materials. Masks and social distancing were to be maintained. 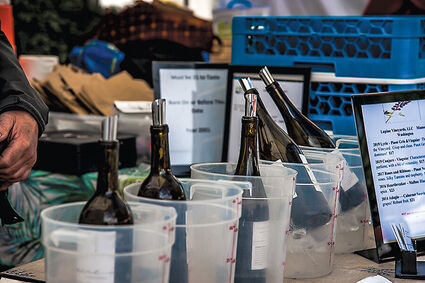 Wine tastings are available at the Summer Market.

The Edmonds Food Bank will have a booth at the market the first and third Saturday of every month.

"We will be working with the Food Bank throughout the summer to offer ways for shoppers to support their organization through donations of either nonperishables or farm-fresh produce," Martin said.