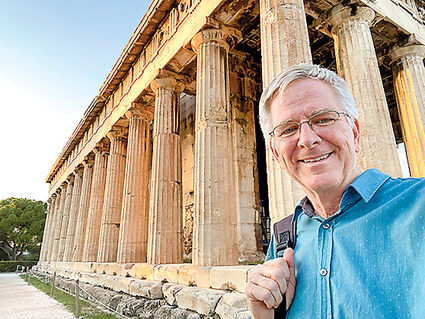 Rick Steves at the Temple of Hephaestus in Athens.

The culmination of three decades of Steves showcasing Europe's great art and architecture on public television, the series will cover the span of European art history through its greatest masterpieces.

Steves will climb deep into prehistoric tombs on remote Scottish isles and summit Michelangelo's dome at the Vatican, as well as visiting French palaces and discussing the works of Picasso and Van Gogh.

"This year, APT is proud to deepen our public television relationship with Rick Steves in our new role as the presenter for the Rick Steves' Europe programming catalog and specials, in addition to handling international licensing for the collection," said Cynthia Fenneman, APT president and CEO.

"We're excited to share his experiences and learnings on art in this exciting series, honed through decades of travel in Europe."

Said Steve: "All my life, art has brought me great joy in my travels. And I've learned that the more we understand art, the more we appreciate it. In this six-hour series, we'll enrich your understanding – and therefore your enjoyment – of European art."

The six-part "Rick Steves Art of Europe" will trace European art from cave paintings and mysterious stone circles through the rise and fall of great ancient civilizations, and the influential periods of the Middle Ages, the Renaissance and the Enlightenment. Through it all, new artistic styles emerged: stern Neoclassicism, unbridled Romanticism, sun-dappled Impressionism.

The series concludes with an exploration of the art of the 20th century as artistic expression was pushed to new frontiers.

Episode 1: "Stone Age to Ancient Greece" – The basis of Western art in symbolism, tombs and statuary.

Episode 3: "The Middle Ages" – Majestic castles, cathedrals and art for the secular and faithful alike.

Episode 4: "The Renaissance" – The rebirth of classical culture through the celebration of humanism.

Episode 5: "Baroque" – Displaying a Europe in transition with displays of both austerity and excess.

Episode 6: "The Modern Age" – New artistic styles that express the complexity of our present-day world.