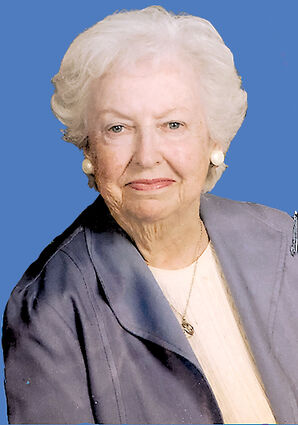 Barbara Ann (Burke) Monks passed away Feb. 2, 2020, surrounded by her family. She was born at the family home in Shoreline on May 21,

1929, the youngest of four children born to Joseph and Helen Burke.

She attended Ronald Elementary and Lincoln High School in Seattle, where she

served as Girls Club president, graduating in 1947 as valedictorian of her class. Barbara attended Marylhurst College for Women in Oregon, where she

was student body president, in the National Honor Society, and received the Joan of Arc award, the highest recognition at Marylhurst.

University of Franche-Comté in Besançon in eastern France.

Church in Seattle, and were married for 64 years. They had seven children and lived for 30 years in the same house where Barbara was born and raised.

She taught English and French at Lake Washington Jr. High. Barbara was very active in the Shoreline community. She was a troop leader with Bluebird/Campfire Girls, a volunteer at her children's schools, active in PTA, and was awarded the Golden Acorn Award for community service.

She and Bob taught CCD classes at St. Luke Parish. Barbara was instrumental in establishing Shoreline as a city and preserving the Ronald School building as the original Shoreline Historical Museum.

She served on the King Co. Landmarks Commission, and was a supporter of Save the Pike Place Market. She was part owner of Basic Books in Edmonds, and a sales representative for Ginn and Co. and Scholastic Books.

In 1993, she and Bob built a home on Liberty Bay in Poulsbo. They attended St. Olaf's Catholic Church. Barbara participated in music and arts club and Friends of the Library, fundraising for the Poulsbo Library children's corner and scholarships. Barbara was especially fond of France, and collected French Quimper pottery.

Barbara was preceded in death by her son Tom and husband, Bob. We will forever remember Barbara's energy, genuine welcoming and caring personality, her love of learning, and strong commitment to family. A memorial service will be held April 29, 2022, at 11 am., at St. Luke Parish, 322 N. 175th St., Shoreline. Please share memories at http://www.becksfuneralhome.com