Mayor: 'Our city will continue to pursue all means necessary to protect our children and residents from gun violence' 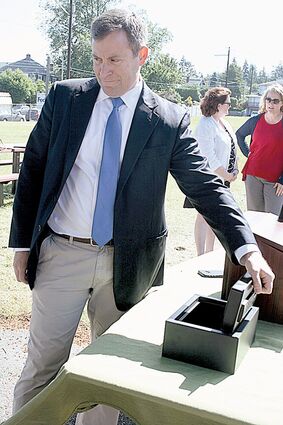 From July 2018: City Councilmember Mike Nelson, a gun owner, shows how he opens his secure lockbox at a news conference at the Frances Anderson Center.

The Washington Supreme Court ruled April 21 that the City of Edmonds' gun storage ordinance – which says guns must be stored safely and away from unauthorized hands – is preempted by state law.

It was a unanimous decision, led by Chief Justice Steven C. Gonzalez.

"The repeated failure of the state and federal government to implement these common-sense safety measures to protect our children from gun violence, and then to have the state supreme court deny local governments this right, feels barbaric," Edmonds Mayor Mike Nelson said in a statement last week.

The ruling seems to signal th...