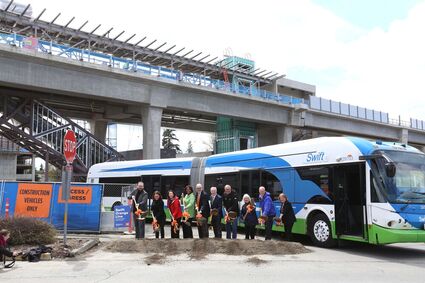 Gov. Jay Inslee joined other federal and elected officials for the official groundbreaking of the new Swift Orange Line in Lynnwood.

Community Transit staff and board members, federal and elected officials, and community partners celebrated the kickoff of the construction of Swift Orange Line at Lynnwood Transit Center on April 19.

When it's finished in 2024, the 11-mile bus rapid transit (BRT) route will serve people who are traveling in southwest Snohomish County.

Swift Orange Line will also be the first BRT (bus rapid transit) line in Snohomish County to connect with Sound Transit's Link light rail when the station opens in Lynnwood, expanding access to many new destinations around the Puget Sound region.