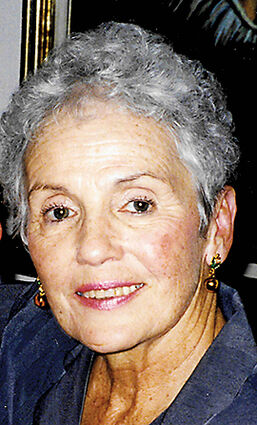 It is with equal parts sadness and joy that we acknowledge that our wife, mother, grandmother, and friend Bobbie Roumonada passed away peacefully at Sunrise Assisted Living in Edmonds on Thursday, April 14, 2022.

Bobbie's suffering was relatively brief. Her passing was with her husband, Jim Roumonada, at her side, and after many of her family members having just visited to share their love and sadness, her passing and our loss is our sadness.

Our joy is that we were able to share so much life and love with this amazing woman.

Bobbie was born on Aug. 4, 1928, at Deaconess Hospital in Spokane. Her parents, Wilbur Eugene Hainline and Jennie Mae Waggoner (Buddie) were living in Spokane and struggling through the Depression.

Bobbie was soon joined, and the family was complete after the birth of her brother, Bill, in the same hospital on May 11, 1931. After that, the family lived in Spokane and had many adventures until they moved to Missoula, Montana, in 1940.

Bobbie remembered much joy in Spokane as the family moved through the lean years, with both of her parents working in various areas of the food business and struggling to make ends meet. She always fondly remembered her years in Spokane as happy and filled with friends and love.

In Missoula, the Hainlines began what would become a successful and rewarding career as restaurateurs. They built and operated the first 24-hour café in Missoula, along the banks of the Clark Fork River. They called it the 4B's ,which represented the first letter of each of their names. Yep, Bobbie was a "B."

Her memories were filled with nights living in their apartment above the restaurant and trying to sleep with a 24-hour sign flashing in her window. Bobbie worked as a waitress in the business, and her brother Bill worked in the kitchen, starting out in the dreaded job of potato peeler.

Missoula is where Bobbie started her rebellious years, but for her rebellion meant sneaking into various churches around town and attending services, even answering "altar calls" where she accepted her entrance into at various times the Lutheran, Methodist, and Mormon faiths.

Bobbie eventually enrolled in the University of Montana and met Frank Butler, a WW II vet and ex-Marine, who was starting his schooling to become a lawyer. They married on Aug.22, 1949, and soon moved to New York to pursue an advanced degree in taxation.

They later moved to New Jersey, then Portland, and finally to Spokane. Frank died on Dec. 26, 1971. With eight children and during a time when women, widowed or not, had a difficult time, she bravely continued to be who she was – strong, faithful, and a pillar.

Bobbie eventually met Jim Roumonada, a Boeing engineer, through mutual friends. They married in September 1976 and lived in Bellevue and later Edmonds. Their lives were happy, adventure-filled, and fairly carefree. Along with the call of their Catholic faith, Jim and Bobbie enjoyed 45 years of travel, laughter, adventure, and love.

Bobbie also cherished her longtime friendships with many, including Dottie Gilmore, Ann Taylor, Ruth Pearson, Liz Gale, Bev Parker, and many, many others.

Bobbie was far ahead of her time in so many ways, not the least of which she couldn't care less who or what you were; she was always willing to see the person, not the color, job, place of birth, or any other earthly circumstance. If you were her friend, you were her friend for life.

Bobbie will be missed by all of us; thank goodness she had 93 years of earthly experiences, and thank goodness we had her for that long as well. God bless and rest in peace and joy, sweet Bobbie.

As she said in her "Memories of Bobbie Roumonada":

... I believe a negative outlook about life can feed on itself and become

almost a habit, alive on its own negativity and unhappiness.

and to experience peace and joy in your own lives. Very hard to

do sometimes when you are "in the thick of it" with

responsibilities and daily challenges, but your day in the sun

will come sooner than you think. God loves you. I love you.