Our shorelines are not where they used to be | History Files 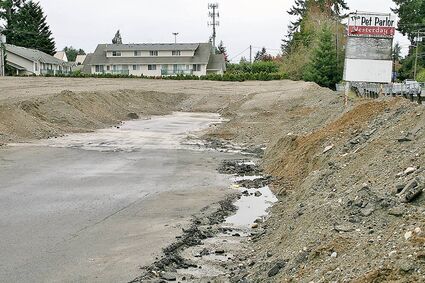 Reed Lake is now piled-up dirt. It was located near 196th Street SW and 76th Avenue West in Lynnwood.

An Edmonds birdwatcher mentioned to me that there didn't seem to be any grebes around. The grebe has always been a very common bird. On any given day he might see hundreds.

A few days later I went to a program at the Mercer Slough Environmental Education Center in Bellevue. There on the shore of Mercer Slough, it is possible to reckon where the shore of Lake Washington was located when the lake was 9 feet higher before the Ship Canal in Seattle was built.

The water-filled areas of the slough were once 9 feet deeper, and much more area was covered by water than is now. The area that is now SE 8th, and the Lake Hills Connector, and parts of Richards Road, were all under water before Lake Washington was lowered.

Now I was curious: Was Lake Sammamish also affected by the lowering of Lake Washington? I asked a knowledgeable source, and was surprised to learn that no one really knew.

The general thought is that Lake Sammamish was lowered by 1 to 3 feet, but there weren't any before and after measurements. The level of Lake Sammamish is now controlled by a weir at the outlet to the Sammamish River (or Slough).

And then I thought about the fact that the Smith Tower in Seattle is located at what was once beachfront property. Would a condominium stand there if it was still beachfront, or would the Smith Tower be mixed use with residences above commercial and office space?

Shorelines throughout the entire region have been altered, with resulting loss of habitat for waterfowl and marine life. The salmon run that was once in the Black River is simply gone.

My little shop in Edmonds is built on what was once a saltwater marsh on the Pacific Flyway. Birds will have a tough time surviving on the asphalt that has replaced their habitat.

In Edmonds, at least, a portion of the habitat has been preserved. Not so in Mukilteo. What is now Lighthouse Park was once a lagoon. The Mukilteo Lighthouse was built on a sandspit. The area behind the spit has since been filled and paved.

This has been the pattern throughout the region. SODO in Seattle is all created from fill. The Duwamish River used to run close to Beacon Hill where I-5 is now. The Black River used to drain Lake Washington from its south end instead of the water flowing west through the Ship Canal and Hiram M. Chittenden Locks.

A small portion of the Black River is still visible near its mouth in Tukwila. A depression that was the channel may be followed back into Renton. Then it disappears completely under streets and structures and the Renton Airport.

When I was young I was told that "Duwamish" meant "river of many colors," rather like Joseph's coat. That isn't true, but it made a good story because the White River, the Black River, and the Green River all joined to form the Duwamish River.

Also when I was young, my father told me that Lake Washington had come all the way into Columbia City where we lived. He remembered a tragic accident with a garbage wagon from when he was small.

Apparently, the brake on the wagon failed, and the wagon and horses tumbled into the lake. The teamster had been able to save one horse by cutting it free. That area was called Wetmore Slough.

It has since all been filled with garbage. The Stan Sayres Hydroplane Pits, and the parking lot are all built on garbage that filled Wetmore Slough.

To the south, Pritchard Beach Park was once Pritchard Island. The street nearest the water on Lake Washington is still called Island Drive.

And if you think I am being critical of those who changed the waterfront lines, let me point out that my family is also guilty. During World War II, my father was the superintendent of the Barbee Shipyard on Lake Washington near where the Seattle Seahawks VMAC is now located.

My dad decided that the best location for the slipway was right at the mouth of May Creek. His solution was to move the mouth of the creek about 200 feet north. Late in life, he told me about the fish jumping at the end of the slipway as they looked for their way home to spawn. He felt that he had killed the fish run.

I don't know whether there are fish in May Creek today, but certainly my father's decision didn't help the fish. He said, "We didn't know." I am sure that was the case for most of the decisions that were made when rivers, lakes, and shorelines were changed.

One lake very in Lynnwood no longer exists. It was small, but I am sure the animals liked it.

Reed Lake was located just east of 76th along 196th, where dirt has been piled for several years in anticipation of new construction going.

Today, it is difficult to imagine that a small lake could have been there.