By Shea Sullivan
For the Beacon 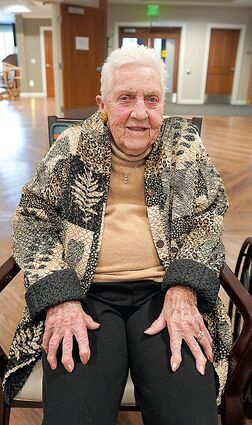 Maize Mays turned 100 May 18 at Quail Park in Lynnwood.

Maizie Mays celebrated her 100th birthday March 18 at Quail Park in Lynnwood, a senior living home. She was actually born March 20, 1922, but what's two days when you're a centenarian?

Maizie told me the last time she was in the newspaper was when WWII officially ended. She was at Pike Place Market in Seattle, and a sailor grabbed her from the crowd and pulled her up on a light pole and gave her a kiss.

This picture landed on the front page of the newspaper.

The secret to her longevity?

"Don't sit down, and keep on moving," Maize said. "Respect those around you."