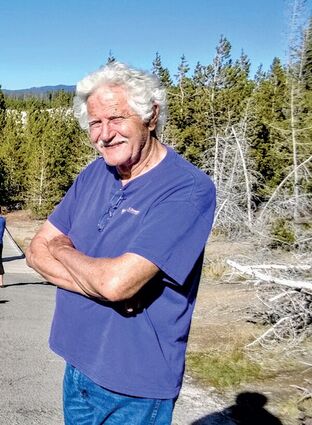 On March 1, 2022, the world became a bit less interesting. John slipped on a frosty step while fetching the newspaper and hit his head, causing a brain bleed. He lingered for a week, surrounded by his loving family. His passing was peaceful.

As a dedicated atheist, John believed in science and pursuit of knowledge, generously donating his remains to the U of WA medical program. He is survived by his wife, Atsuko, children Lya and Chris; and grandchildren Izabel, and Wilbur, previously known as Patricia.

To mention all John's lifetime accomplishments would require a book, so we will focus on a few highlights. Born in 1930 to Nell Shepard and E.K. Badgley in Missoula, Montana, John was the youngest of four siblings: Gladys, Kirk, and Marion.

He often reminisced about his early childhood – the lessons learned growing up in Depression-era Montana shaped his identity as a man. Meeting Patricia McMeekin in religious studies class at the U of Montana forever changed his path.

In 1952, while stationed in Hokkaido, Japan, during the Korean War, the young couple developed a lifelong admiration for Asian cultures. John went on to achieve his Ph.D. from Berkeley in political science, specializing in the region. Together, they traveled to Burma and forged a deep commitment and love for that culture that extended to their children.

Until Patricia's death in 1984, they challenged and supported each other through all of their adventures. John was lucky enough to have two great loves. In 1996 he married Atsuko Koseki and, in addition to digitizing and curating the Echols Collection at Cornell, opened La Table restaurant, with her by his side as head chef.

She continued to feed him well until the end. John had a varied and rich professional life as a writer, scholar, professor, librarian, curator, and restaurateur.

A distinguished alumni of the University of Montana and recipient of two Fulbright scholarships, he was an unconventional and visionary thinker. He taught at Miami University in Ohio, John's Hopkins School of Advanced International Studies in Washing D.C.. and Cornell.

He established nonprofits relating to public policy, education, and environment, including the 1973 Institute of the Rockies, 1991 Cambodia Library Archival Preservation Project, 2008 Nargis Library Recovery, 2017 Montana Voices – to name a few.

A man of strong convictions who never failed to speak his mind, John was deeply dedicated to family and was always a potential mentor, uncle, or grandfather to whomever he met. He remained curious, exasperating, fascinating, and charismatic until his death. He will be missed by many.

A Celebration of Life is planned for both Edmonds and Missoula in the summertime. John loved a good party.