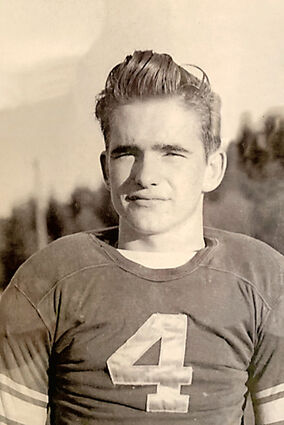 Frank Murle Bly was born in Wilton, North Dakota, on June 19, 1931, to Murle and Margret Bly, a contractor, and a homemaker.

After the university, Frank joined the King County Sheriff's Department, where he served until retirement in 1973. His next endeavor was starting Bly's jewelry in downtown Edmonds.

Frank was blessed with a large and loving family. He married his high school sweetheart, Jeanice Truax on November 19th, 1950. Frank helped raise five children and taught them discipline, hard work and determination. He taught them to play sports, and often took them on long and adventuresome family vacations.

Frank was a great golfer, outdoorsman and all-around gifted athlete. Frank was a man's man and was blessed with an extensive group of friends. Frank gave his time freely to many charity-based organizations and was a Freemason. He will be dearly missed by all his friends and loved ones.

Frank is survived by his current wife, Miwa Morita; his first wife Jeanice Truax with his son Robert; daughters Patricia, Connie, Susan, and Stacy; his stepchildren, Steve, Pam and Michiko; his 16 grandchildren; his five great-grandchildren; and his brothers Jim and Phil, and sisters Laura, Donna, and Marilyn. He is preceded in death by his sister Winnie.

A Funeral Service will be held on Friday March 11 at 11am at Beck's Tribute Center, 405 Fifth Avenue S, Edmonds; with a Graveside service following at Holyrood Catholic Cemetery in Shoreline. For those unable to attend the service Funeral will be Live Streamed at http://www.beckstributecenter.com by gong to Frank's obituary page.