Swedish Edmonds is part of the consumer protection lawsuit 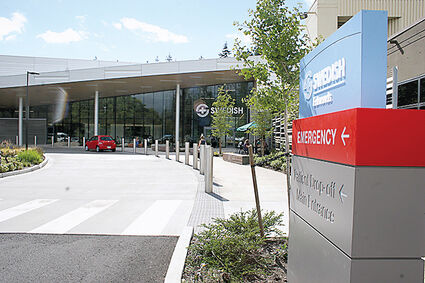 Swedish Edmonds is among the hospitals in a lawsuit brought by Attorney General Bob Ferguson.

In a news release, Ferguson said he will also file a motion for preliminary injunction unless the hospitals agree to stop their conduct while the case is ongoing.

Together, these hospitals reported more than $18 billion in patient service revenues in 2020.

– Training employees to aggressively collect payment without regard for a patient's eligibility for financial assistance, instructing them to use a specific script when communicating with patients that gives patients the impression that they are expected to pay for their care. Providence instructed employees: "don't accept the first no";

– Failing to notify patients they were eligible for charity care financial assistance when the providers determined they qualified for assistance; and

The hospitals' illegal conduct began in 2018. Much of their conduct continues to this day, the lawsuit asserts, despite the Attorney General's Office investigation and previous lawsuits Ferguson has filed against other hospitals over similar practices.

A Providence financial executive admitted in a deposition in November that the hospitals continue to send patients eligible for financial assistance to collections.

This is the third major lawsuit Ferguson has filed related to charity care. Ferguson launched the investigation after receiving complaints about Swedish's charity care practices.

"Charity care helps low-income families avoid crushing medical debt by making financial assistance available to those who qualify," Ferguson said. "Hospitals cannot deceive Washingtonians about their legal right to access medical financial assistance. They must follow the law, and ensure low-income patients have access to the resources they need."

The lawsuit seeks restitution in the form of full write-off of medical debts, and refunds, plus interest, for patients who did not receive financial assistance. In addition to the $70 million in debt relief and refunds, Ferguson is also seeking millions of dollars in civil penalties. The total number of Consumer Protection Act violations will be determined as the case progresses.

If you paid for medical services or are in collections for a medical bill from a Providence or Swedish hospital or Kadlec Regional Medical Center, and believe you may be eligible for charity care, contact Attorney General's Office Investigator Bau Vang at 206-516-2989 or by email at [email protected]

Kadlec is located in Richland. All 14 of the hospitals operate under the national nonprofit health system Providence St. Joseph Health, which is based in King County.

In contrast to its conduct, Swedish proclaims in its values statement the hospitals "stand in solidarity with the most vulnerable, working to remove the causes of oppression and promoting justice for all." Providence states its mission is "serving all, especially those who are poor and vulnerable." Kadlec Regional Medical Center, which is also included in Ferguson's lawsuit, similarly says it is "committed to serving all within our communities, especially the poor and vulnerable."

Washington's charity care law requires all hospitals - for-profit and non-profit, public and private - to forgive some or all of the out-of-pocket cost of essential health care for low-income patients who qualify. The law covers Washingtonians whose household income is at or below 200 percent of the federal poverty level.

Hospitals are required to provide notice of the availability of charity care both verbally and in writing and screen patients for charity care eligibility before attempting to collect payment.

Ferguson's lawsuit asserts that Providence, Swedish and Kadlec developed and encouraged a corporate culture that prioritizes collection over charity care, aggressively attempting to collect payment at the time of treatment and continuing to collect post-treatment even when the hospitals know that a patient is eligible for financial assistance.

The Attorney General's Office investigation revealed that the hospitals train employees to ask for payment in a way that implies that payment is expected, while obscuring a patient's right to apply for charity care.

The hospitals train staff to "ask every patient every time" to pay their outstanding medical costs in every patient interaction without adequately disclosing the availability of charity care.

Training materials outline a strategy titled "Don't accept the first No" to encourage employees to continue pressing for payment even after the patient says they can't pay.

Employees are also trained to use phrasing that gives patients the impression that "payment is expected."

Revenue targets are also assigned to teams of employees that collect patient revenue, and those employees meet frequently to "cultivate a culture of collections and promote accountability," training documents show.

Fail to tell patients when they know they are eligible

After treatment, the Providence-affiliated hospitals also fail to inform patients they know are charity care-qualified, the lawsuit asserts.

If a patient does not pay at the time of treatment, the hospitals send patients three bills and a pre-collection letter to attempt to collect.

Until September 2019, the hospitals ran all delinquent accounts through the tool. After that date, the hospitals stopped running any accounts where the patient was insured, including public insurance like Medicaid. Most Medicaid patients are charity care-eligible due to the income requirements of the program.

After September 2019, the hospitals also stopped granting presumptive financial assistance when the tool identified that the patient's income was between 151 percent and 200 percent of the federal poverty level - income levels still eligible under Washington state law.

Internal emails reveal that the hospitals made these changes to increase collections from patients in this income range because they believed they might pay their bills if collection attempts continued.

In a January 2020 email, Providence's executive director of customer experience explained that Providence narrowed its use of the tool because of concerns that patients who could "potentially pay" could receive financial assistance. In the same email, the director confirmed that the changes resulted in the desired impact of lowering charity care "across all markets."

Between September 2019 and September 2021, the hospitals sent 46,783 accounts associated with patients with income between 151-200% of the federal poverty level to debt collection agencies.

Collectively, these accounts had outstanding balances of $53 million. They continue this practice to this day. In addition, since it stopped running insured patients through the tool, the hospitals sent an additional 8,454 accounts of currently enrolled Medicaid patients to debt collectors, totaling $20.3 million in out-of-pocket patient costs.

Once their accounts are sent to collections, it is likely the patient's credit is negatively impacted by the debt.

Wow oh wow. Unbelievable. I am totally shocked that this would happen at public hospitals. I expect this will cost who, Swedish and Providence. This with the civil suits could destroy them. So now what.