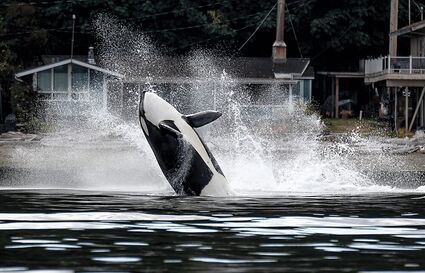 An orca breaches in Puget Sound between Edmonds and Kingston.

Orca Conservancy, a nonprofit organization dedicated to defending killer whales, is preparing to install a series of recording devices locally to protect the population of southern resident killer whales.

They will be installed at Beach Camp at Sunset Bay off Norma Beach Road in unincorporated Edmonds/Picnic Point.

Though they have no natural predators, the orcas face multiple existential threats caused and exacerbated by the high level of human activity in the region. Orca Conservancy aims to combat this with an array of hydrophones in Salish Sea to support a system to alert vessels of wh...