Judges, police, TV anchor, and a business leaders all on the schedule 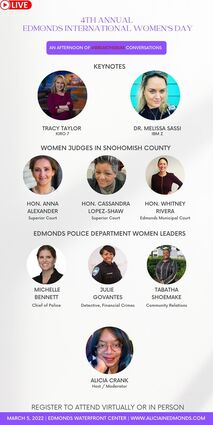 Edmonds resident Alicia Crank of Crank'd Up Consulting and Megan Wolfe of Girls on the Run Snohomish County have announced the lineup for the fourth annual Edmonds International Women's Day.

Tracy Taylor, traffic anchor for KIRO 7 News, is one of two keynote speakers.

“I’m extremely honored to be a part of celebrating women who ‘breaking the bias,’ not only in our communities, but communities around the world,” she said.

The event will be held the afternoon of Saturday, March 5, at the Edmonds Waterfront Center, with a VIP reception at Workhorse HQ. It is being planned as a hybr...