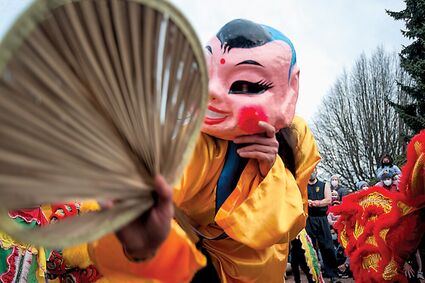 Those near the action were able to get up close and personal with the lion dance performance.

After watching his first lion dance performance at age 6 in Seattle, David Leong decided he wanted to become a lion dancer. Fifty years later he's still dancing, while teaching generations of kids and adults about lion dancing and kung fu. Some of his students have been with him for 16 years.

On Saturday, he brought his long-held passion to Edmonds for two performances with his Northwest Kung Fu & Fitness team as part of the inaugural Lunar New Year Edmonds celebration.

Edmonds welcomed him and his crew with open arms.

"What a beautiful crowd. What a great turnout," he said after the no...