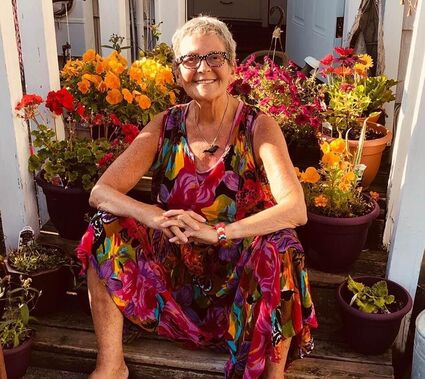 A bright light has gone out in Edmonds and the world with the passing of beloved teacher, mother, sister, friend, filmmaker, and advocate for media literacy: Claire Douglas Beach.

Since 2001, Claire taught thousands of students in the Seattle and Edmonds School districts as technology media instructor. Her “superpower” was reaching the kids who struggled the most and who needed her brand of support. Her legacy with these students continues, and many became dear friends.

More importantly, she was a staunch and fierce advocate for media literacy – a tool for students to understand how media affects them – long before fake news and alternative facts became so prevalent. She despised the use of media to deceive. Claire was a pioneer in this arena; she began teaching media production and media literacy in 1984.

In 2016, she led the effort to pass legislation in Washington state that became the model for a bill that has been passed by five states and debated in numerous other statehouses across the country. And again in 2017, she led a team in advocating for a successful follow-up bill to provide an appropriation, a big win for media literacy. Washington continues to be a leader in media literacy as an result of Claire’s advocacy.

Prior to that, her work as an award-winning filmmaker in Boston, Mass., with the Women's Video Collective and Somerville Producers Group in the early 1980s revealed her frustration with corrupt politicians and her dedication to promoting a feminist vision of the world.

Her life was marked by an indefatigable spirit as she inspired those around her with steadfast love and support that brought out the best in all of us. As passionate as she was generous, she left a mark on her students as well as on family, colleagues and friends.

Her fight with cancer slowed her down just a bit. When chemo resulted in hair loss, Claire had artist friends paint and henna her head which she then used as a teaching tool in the classroom to openly discuss cancer. Claire often said, “Chemo heals my body; teaching heals my soul.”

Claire received a BA from Florida Atlantic University and an MA in psychology from Goddard Cambridge.

Claire found her home when she moved to the village of Edmonds. She loved the community of Edmonds and was loved back.

A celebration of Claire will be held at 10:30 a.m. on Feb. 13 at the Edmonds Waterfront Center. If you wish to share a memory or contribute to a memorial fund, visit https://everloved.com/life-of/claire-beach/. The memorial fund will help cover the costs of arrangements and memorial service, as well as support media literacy efforts.