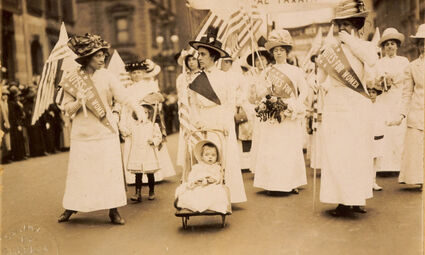 U.S. Department of the Interior

Women fought a decades-long battle for the right to vote, and now lawmakers want to memorialize the crusade by designating March 22 Women's Suffrage Day.

The 19th Amendment, prohibiting voting discrimination on the basis of sex, was passed over a century ago, with Washington becoming the 35th of 36 states to ratify on March 22, 1920.

The House Committee on State Government & Tribal Relations received notes and commentary from the public regarding the proposed bill during a remote hearing Jan. 10.

"I am a vice president of a union that is 70% women," she said. "We know the right of women to vote is critical."

"Many black women remained disenfranchised because the nineteenth amendment did not eliminate state laws that operated to keep Black Americans from the polls," she said.

Speaking to the exclusion of people of color during the voting movement, White urged the committee to consider a day recognizing "the importance of the suffrage movement for all women." She did not suggest a specific date.

Women's Equality Day is celebrated nationally on Aug. 26 to commemorate the national adoption of the 19th Amendment. The observance, however, is not considered a federal holiday meaning government offices, schools and banks remain open.

Michael Moran, lobbyist and civics educator for Lake Washington High School, offered support for the bill and pushed for a more comprehensive curriculum, including the suffragette movement and the role women of color played.

"What needs to be taught, especially today, is the value of the voting franchise," he said.

The potential inclusion of the state holiday in schools might be dependent on another proposed bill for the 2022 session, HB 1617. The bill specifies all state holidays are also considered school holidays.

Rep. Debra Lekanoff (D-Anacortes) ended the public hearing with a quote from American abolitionist Sojourner Truth, commenting on the strength of women.

"It's a celebration of women rising," she said, "and all the hard work that Washington State and the nation has done for everybody and every American."

The Washington State Journal is a non-profit news website operated by the WNPA Foundation. To learn more, go to wastatejournal.org.