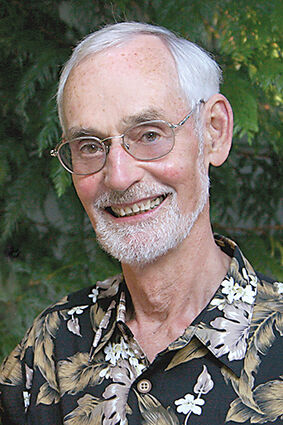 Jerold Hunter Sutton died peacefully Dec. 7, 2021, his loving wife and family members by his side. He was born to parents Lloyd and Joy Sutton in Glendive, Mont., on Mar 11, 1932. He grew up on the family wheat farm near Bloomfield with brothers Lloyd Jr., and Gene and sister Carol, who have all preceded him in death.

Jerry attended a one-room schoolhouse for the first six grades. During junior high and high school, he lived with his maternal grandmother in Glendive, graduating from Dawson County High School. He attended and graduated with a BA in music from Wheaton College in Wheaton, Ill., where he was known for his powerful baritone in choral and solo performances.

While there, he met Bonnie Olson, and they were married on June 15, 1956. He sang "The Sunshine of Your Smile" for her during the ceremony. After his military service, they moved to California, where he enrolled in Berkeley Baptist Divinity School, graduating with a BA in ministry.

Jerry served churches in Bozeman, Mont., and in Gig Harbor, Hoquiam, and Lynnwood as he increasingly embraced a more open-minded and reflective Christian faith. In addition, he received a MEd in vocational rehabilitation counseling from the University of Washington and worked in that field between ministries.

Jerry and Bonnie lived in their home in Edmonds for 49 years, raising three children and enjoying hiking, boating, skiing, tennis, golf, singing in choral groups, and reading. He was an excellent photographer, an enthusiastic guitar player, and a willing if not instinctual dancer, open to leading and to being led according to the moment.

Retirement from Good Shepherd Baptist Church in Lynnwood made possible several adventurous trips to Europe and winters spent in Arizona. The couple joined Seattle First Baptist Church, where they became a part of a welcoming and affirming congregation: Exploring personal growth, serving community, and embracing diversity were all important to Jerry.

They moved to Fairwinds Brighton Court in Lynnwood in 2018. Soft-spoken with a wry wit, Jerry loved children, and they loved him back; vacations spent with his children and grandchildren were highlights for all, including a first trip to Alaska when he was 87.

Afflicted by Alzheimer's, he continued to make jokes, blow kisses, and share flashes of self-reflection until his last days. Jerry is survived by Bonnie, his wife of 65 years; children Dale (Beth), Terri (Dave), and Mark (Stephanie); grandchildren Alanna (Stefan), Michelle (Doug), Kym, Ben, and Bodi; and many dear friends from Good Shepherd and Seattle First.

Those and many others continue to love him for his deep intellect, gentle presence, unflagging sense of humor, and great, generous heart. A celebration of life for Jerry will be held at 2 p.m. on Saturday, Feb. 19, at Good Shepherd Baptist Church in Lynnwood and live-streamed on Zoom.

Please wear face coverings and be fully vaccinated. In lieu of flowers, donations can be made to Companis.org, whose vision is a world where compassion meets action.