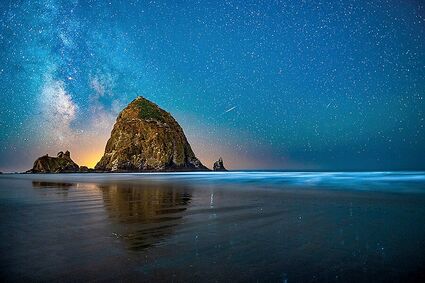 Kuria Jorissen's "Ocean of Stars" is among her works at Gallery North.

How about year-round farmers markets?

It's a reality now in Edmonds, as the City will hold its first Edmonds Winter Market beginning Saturday, Jan. 29, in honor of the lunar new year, according to Valerie Claypool of 247 Events, who contracts with the City on the Holiday Market.

It will be held on Fifth Avenue North in front of City Hall and the Edmonds Museum from noon to 4:30 p.m.

Other activities are scheduled during the markets, Claypool said.

More vendors will be announced as they come on board.

The City of Edmonds puts on the Holiday Market, which recently concluded its seventh season. It runs from the first Saturday in November through the last Saturday before Christmas Day.

This year, the City also debuted the Uptown Edmonds Evening Market during three Satudays in July, August, and September.

The Edmonds Chamber of Commerce's Clam Chowder Cook-Off, typically held in January, has been canceled for the second straight year. The last event came in 2020, just before the pandemic started.

According to Chamber President and CEO Greg Urban, the cancellation is for several reasons:

A small indoor space with lots of people; staffing shortages at restaurants; supply shortages for restaurants; and uncertainty about COVID restrictions and case counts at the end of February.

There is a new Historic Edmonds Calendar for 2022, available for pickup at City Hall, Frances Anderson Center, and the Edmonds Historical Museum.

Once again, the calendar – this year with the theme of "Then and Now" – is free. If you are interested in reserving one or more copies of the calendar, email [email protected] or call 425-771-0220.

Gallery North: 'In With the New'

Gallery North's January show, "In With the New," will highlight two new members from 2021: Yasuko Nakamura and Kuria Jorissen.

Yasuko Nakamura is a fantasy artist, mixing concepts and aesthetics of the East and West in her work. Watercolor is her favorite medium, though she enjoys black and white drawings, and digital painting as well.

Kuria Jorissen's show spotlights her interest in astrophotography. Often traveling to far off wilderness areas, Kuria does most of her work from midnight to 4 am. Jorissen focuses on studying new techniques for capturing and editing photos, planning tools, astronomy, and the lesser-known stories of the stars.

Classical cellist Nathan Chan will be the featured soloist when the Cascade Symphony Orchestra – under the direction of maestro Michael Miropolsky – performs its next concert . "From the New World" is Monday, Jan. 10, featuring the musical works of Russian composers Pyotr Ilyich Tchaikovsky and Nikolai Rimsky-Korsakov, as well as Czech composer Antonin Dvorak.

The concert begins at 7:30 p.m. at the Edmonds Center for the Arts, 410 Fourth Ave. North. A pre-concert lecture at 6:30 p.m. by KING-FM radio personality Dave Beck will preview the musical highlights for the evening.

A member of the Seattle Symphony, Chan has performed as a soloist with the San Francisco Symphony, the Royal Philharmonic, Albany Symphony, Reno Philharmonic, and Hong Kong Chamber Orchestra.