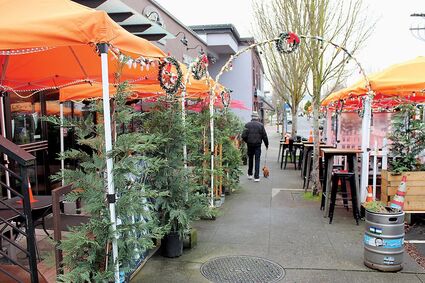 Jeff and Erika Bennett say they will take down their Salish Sea Brewing Company streatery, pictured at right, after the City Council decision on Monday.

One political move erased another Monday night in a remarkable display of political one-upmanship among Edmonds City Councilmembers, with two not showing up and two others leaving the meeting before a decision was to have been made.

Then there's the issue of a disputed agenda notice.

The result: The approval of amending the streateries decision that passed Thursday, Dec. 16, stands due to a lack of quorum, with only three of the seven councilmembers remaining: Council President Susan Paine and Councilmembers Adrienne Fraley-Monillas and Laura Johnson.

So restaurants wanting to continue offering outdoor dining in the public right of way must pay a one-time fee of $4,000 to continue through the end of April. If not, they must disassemble their temporary structures by Jan. 15.

The restaurant fees are intended to be used to rent parking spaces that may become available to the public.

The political maneuvering began Saturday when an agenda item appeared on the City's website: "There are three councilmembers who would like to amend the recently adopted ordinance extending streateries." The lead on the new agenda item – usually a City staffer – listed Paine.

The councilmembers were not named, but Paine emailed The Beacon late Sunday afternoon to say they were Chen, Fraley-Monillas, and Laura Johnson.

That led one public speaker on Monday, Finis Tupper, to claim the meeting was unlawful, as the wording of the item listed only three councilmembers, and it takes four councilmembers to bring an amendment to vote.

City Attorney Jeff Taraday said, in his opinion, the meeting was indeed legal.

The disputed agenda would have charged restaurants $2,000 instead of $4,000 and extended the use of streateries to the end of May instead of the end of April. Restaurants would also be allowed to make monthly payments.

At 5 p.m. Monday – meetings typically begin at 7 p.m. – Councilmembers Diane Buckshnis and Kristiana Johnson were not present for the Zoom meeting. Later on Monday night, Buckshnis said she had a prior commitment and that she and Kristiana Johnson – who could not be reached for comment – would have attended the meeting if held on Tuesday, the usual meeting day.

"I had a long-standing yearly commitment that I could not change," Buckshnis said. "The council president was very aware that I was available on Tuesday and not on Monday. Further, constituents sent me a number of emails that had Twitter feeds on them from councilmembers, and it appeared as though my vote or my presence was not needed. Calling a special meeting on a Saturday night without ample notification to other councilmembers or even checking about their schedules is plain wrong."

"Council President Paine told me expressly when she gave me the heads up about the special meeting that she did not call for the meeting – it was already scheduled," Olson said Monday night.

"She told me there were three councilmembers, and she was not one of them.

Olson claimed she challenged the issue of there being enough support via email. That was the first time Paine said she was one of the four needed, Olson said.

"I am already a subject of one of Mr. Tupper's lawsuits. From what I know about the facts of this situation, it's not clean enough to feel comfortable. And, regarding Adrienne Fraley Monillas' comment (during Monday's meeting), I did not come to this meeting planning to leave it."

Chen was present for most of the meeting – he was one of those calling for a reconsideration – but left after saying he could not vote with three councilmembers absent.

That meant the meeting was over, leaving only Paine, Laura Johnson, and Fraley-Monillas.

Fraley-Monillas – whose term is up at the end of the year – said the actions Monday night were a purposeful effort to not bring the amendment to a vote.

The convoluted story on how that decision was made – or not made – centers on new Councilmember Chen, who received a quick lesson in Edmonds politics over the weekend on how divided his seatmates stand on much of the legislation they vote on.

Chen is also proving to be a swing vote on issues that have divided the council for much of the past two years.

The intent of the streateries

To recap: In August 2020, councilmembers voted to allow streateries in the public right-of-way, typically in parking spaces designed to allow for food and beverage services. The intent of the special-event permit was to help restaurants survive during the coronavirus pandemic when public dining inside was not allowed and takeout was the only option. The ordinance was set to expire Dec. 31.

The City of Edmonds pushed for a six-month extension with no fee, with Mayor Nelson leading the charge. The continuing COVID pandemic – with the new omicron variant now increasing positive tests – was cited as an important driver of the extension.

"Our outdoor dining streateries program has been a resounding success keeping our community safe and our local economy thriving during the pandemic," Nelson said.

"Thanks to the actions of select councilmembers (Thursday) night, our city now has the shameful distinction of charging restaurants the highest permit fee in the nation.

"Our small businesses that were hurt the most will now need to pay the most. This action will have a crippling impact on our downtown."

In addition, a poll of more than 4,100 residents had indicated a slim majority of support for the extension, said Economic Development Director Patrick Doherty. He added that the cities of Anacortes, Bellingham, and Wenatchee have all made streateries permanent.

But on Dec. 16 – the last scheduled council meeting of 2021 – Chen proposed an amendment to the original amendment, and with Buckshnis, Kristiana Johnson, and Olson voting in favor, it was approved.

Chen's amendment: The 17 restaurants that currently use streateries would have to pay a one-time fee of $4,000 to continue through the end of April. Those not wishing to continue would have until Jan. 15 to take their streateries down.

Voting against were Buckshnis and Olson, who both had expressed support for ending the streateries program Dec. 31. Their arguments, as well as those of others, was that the ordinance is not needed, as Gov. Jay Inslee on June 30 decreed that restaurants could return to full capacity.

In addition, Olson said she took repeated tours of downtown, at various times, and found that the streateries were not being used in large numbers, especially during the late fall and early winter seasons. Olson and Buckshnis also mentioned that 28 restaurants in Edmonds already have some sort of outdoor dining, including nine of the 17 restaurants with streateries.

Fraley-Monilas had a retort to that: "I double dare Ms. Buchshnis to sit out there in the rain and order (her) dinner."

Another argument: Streateries are on the public right of way and are favoring only a small number of downtown businesses.

Others noted that the streateries take up too much parking space – 34 spots in total – and that they are dangerous, as they are in the public right of way on streets.

In addition, as public speakers at council meetings have noted, streateries look like "shacks," they hurt retail business – in addition to being unfair to them – and time was up on giving the restaurants free real estate to expand their business.

Chen's $1,000 a month figure (although the $4,000 was to be paid up front) was taking the low figure, $500, and multiplying by two, as that is how many parking spaces the streateries each take up.

"Not only is that anti-business," said Laura Johnson, "it's cruel."

Scenario: If Luke Distelhorst had retained his appointed Position 2 seat – he failed to move past the August primary – he said he would have voted with Paine, Laura Johnson and Fraley-Monillas to extend the temporary streateries, due to expire at the end of the year.

Distelhorst had expressed support for the streateries extension in the past. "Absolutely extend, and at a much more reasonable cost that is consistent with regional benchmarks," he said this week. "That supports employment, local businesses, and safe dining options."

Jeff and Erika Barnett, who own Salish Sea Brewing Company on Dayton Street, have been major proponents of extending the streatery ordinance. They were not happy with Monday's vote.

"The original ordinance was put into place in support of restaurants during the pandemic," the Barnetts wrote in a letter to the mayor and councilmembers. 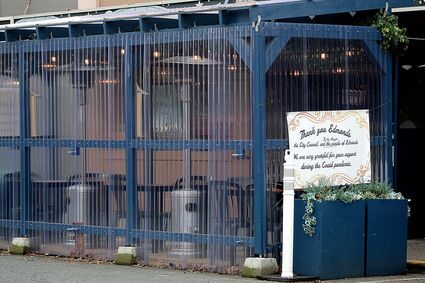 Daphne's on Main Street posted a sign of appreciation to those who have supported it.

"This new fee structure appears to be in conflict with the intended purpose of the ordinance for safe, outside dining to Edmonds residents. Rather it is an attempt to put a value on the City right of way for curb-side dining, separate from the pandemic and emergency order we are still under."

On Monday, Erika Barnett added: "We shouldn't be paying a premium for providing a health service to the community."

Edmonds' new Development Services Director Susan McLaughlin said City inspectors would ensure that all streateries continue to be in compliance.

Two are currently not.

"Chanterelle and Claire's are currently not in compliance," McLaughlin said. "But we are actively working with them to correct the noncompliance issues."