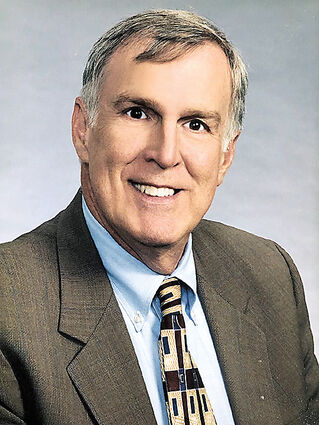 Richard ("Dick”-"Glass") Glassburn passed away peacefully at home due to complications from sepsis on Nov. 1, 2021. A generous, caring husband, father, grandfather, and friend, he loved his family and dogs, the beauties of nature, and navigating the stock market. He will be greatly missed by all.

Richard was born in San Luis Obispo, Calif. He grew up in Denver, attending public schools, where he played several sports, his favorite being basketball. He attended Claremont Men's College, where he played basketball and fostered a passion for the rock and R&B music of his day. He graduated from CMC in 1966 with a degree in business.

After college, Richard enlisted in the army as a second lieutenant and served in Baumholder, Germany, as a tank commander. After his discharge as a first lieutenant, he moved to Seattle and developed a life-long appreciation for the Pacific Northwest.

Beginning his career in the financial markets, he joined Herron Northwest as a rookie stockbroker. While there he met his wife, Kathleen, to whom he was married almost 50 years. In 2019, he retired from D.A. Davidson after 50 years in the business.

At work, his exceptional care for clients, support and encouragement of colleagues, and consistent direct communication, defined him. Richard never left anyone to guess what he thought.

At home, he loved gardening and shared his delightful bouquets with all. Rain or shine, he was happiest with his hands in the dirt, wearing his rainbow suspenders, and cultivating his own varieties of seed dahlias. He also loved fishing – for salmon in Sitka, Alaska, and for trout at the family cabin in Colorado with his grandchildren.

When Richard was not outdoors appreciating nature, he most enjoyed watching Gonzaga basketball games and relaxing at home with Kathleen and their four dogs.

He is survived by his wife and two children, Samuel Bown (Celina) and Stephanie Kathleen (David); four grandchildren, James, Benjamin, Caroline, and Eleanor; as well as his brother Thomas (Vicki) and sister Suzanne; and nieces Katie (Eric) and Lindsey (Nick).

Donations in Richard's memory may be made to Childhaven, Seattle, Washington.