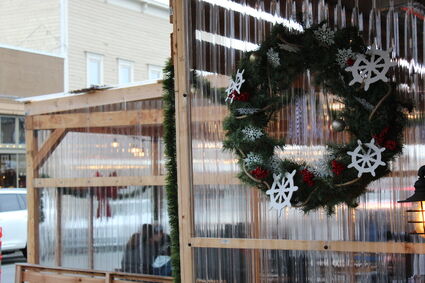 Editor's note: The following was sent to local media in advance of the City Council vote Tuesday, Dec. 14, on a six-month extension of Edmonds' streatery program.

The Downtown Edmonds Merchants Association and the Edmonds Restaurant Streatery Participants have come together to provide a joint statement of support for an extension of the Streateries program based on the following considerations.

Our two industries have always coexisted in a mutually beneficial way, bringing a vibrant sense of community and economic vitality to the area. Unprecedented times like these require innovative action to ensure that our local retailers and restaurants continue to thrive in a fair and equitable environment.

Recognizing the need for our neighboring restaurants to survive during the pandemic, the majority of the members of DEMA supported the installation of the streateries, which was an important lifeline in maintaining our downtown corridor.

Retailers struggled during the pandemic as well, and unlike the restaurants, were given no special accommodations to improve sales. Some were hit harder than others, being sandwiched between streateries or losing sales due to fewer parking spaces.

Instead of restaurants and shops closing, they've survived what hopefully has been the toughest part of the pandemic related shutdowns. DEMA recognizes that a downtown corridor like ours thrives when both restaurant AND retailers exist in harmony and cooperation.

The local Restaurant Streatery participants acknowledge that the City of Edmonds got creative and provided the industry with a means to serve customers outside during reduced capacity.

It provided, and continues to provide, necessary opportunities for guests to dine in a safer open-air atmosphere, as well as allowing our local restaurant industry to continue to keep hundreds of staff employed.

Our two groups would like to propose the following items as consideration for the final extension of the streatery ordinance:

- Restaurants with streateries are more than willing to contribute funds towards a cause that benefits all. We propose a range of $500-$750 per month for the usage of two parking stalls. Funds collected from streatery participants should be allocated directly to the leasing of replacement parking spaces at nearby private lots, and additional considerations should include wayfinding signs and a communication plan with paid advertising.

It is important that the public knows about additional parking spaces in the downtown corridor.

- Safety is paramount to the success of this program. The original intention for these streateries was to provide a safe dining atmosphere for patrons, especially those who are unable to be vaccinated. All streateries should be compliant with current city building codes, and be up to date with City business licenses and any fees related to the downtown core.

- For those who do not wish to take part in the streateries any longer, we propose a 30-day take-down period to ensure there is enough time to hire and plan for the job.

Restaurants and merchants want to reiterate that we have come together to work in tandem on moving forward. Edmonds is a special place and deserves cohesion and not division. We ask that council please consider our ideas and move forward in a productive way.

I see no comments here on this article. I am surprised. I personally am not a streateries fan and know thru the CDC and WHO that we are getting a good handle on the virus now,. If vaccinated (that is your business not mine) but if vaccinated and get your booster if you get this omni you will have few side effects and a mild illness. This I believe is true. I took the time today to phone about 10 merchants to see what they want and 80% really do no want the streateries. One yelled in fact... So I think we stay the course, we vote, if the vote passes to remove they will be and by the 31st of December just like the laws and statues say... No exception. Maybe other considerations next summer but not on the two main parking and shopping streets in the Bowl. Just want you all to know that many merchants I think have been put in an awkward position. I do not like this...