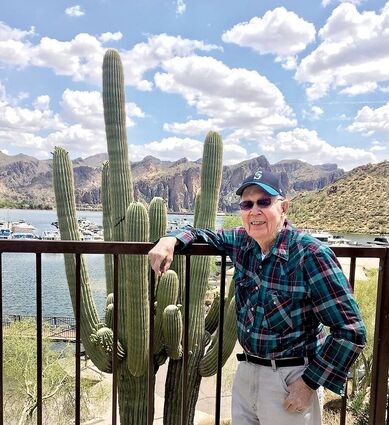 Clarence Edward Caspers passed away peacefully on Nov. 9, 2021, in Kent, Wash., at the age of 93. Clarence is survived by his children, Thom Caspers and Diane Javelli; daughter-in-law Adrianne; son-in-law Joe; and five grandchildren: Davis, Graeson, Rhyane, Michael, and Taylor.

He is also survived by his partner, Joann Erickson Gomes. He is preceded in death by Frances, his wife of 52 years; his father, Anthony; mother, Irene; as well as brothers Jim and Bob.

Clarence was born on Feb. 23, 1928, in Edmonds. He attended Edmonds High School and then the University of Washington, where he majored in music and minored in history. He was a member of the Husky Marching Band and loved playing “Bow Down to Washington” at many Husky football games.

In 1951, he moved to Darrington, Wash., to start his teaching career at Darrington High School. He taught music for a number of years before switching to history, world affairs, and careers. He was coach of the boys tennis team from the beginning, and also starting coaching the girls tennis team in the ’70s. He continued coaching until he retired in 1987. He was inducted into the Darrington Athletic Hall of Fame in 2015.

Clarence loved music, especially classical and opera. He loved travel, hiking, fishing, gardening, reading, photography, and was an avid stamp collector. He attended First Baptist Church and served as music director of the choir. It was there on the steps of the First Baptist Church that he was introduced to Frances, whom he married in 1960. He built their home together with his dad, Tony, who was a carpenter.

After retiring in 1987, he worked several summers for the U.S. Forest Service alongside Frances at the North Fork Guard Station.

Over the years, Clarence – aka Mr. Caspers or “Mr. C.” – touched many lives and multiple generations through his teaching, coaching, and community involvement. He served in many positions: library board, planning commission, National Archery tournament, and school facilities advisory committee.

In 2015, Clarence moved to Arbor Village in Kent, where he enjoyed an active life teaching music programs to his fellow residents and attending Michael and Taylor’s band concerts, plays, and tennis matches.

He enjoyed traveling to Arizona to see his other grandchildren, Davis, Graeson, and Rhyane, and attending their events and basketball games whenever possible. But more than anything, Clarence loved and supported his children, Thom and Diane, through everything! He was always our biggest cheerleader, and we will miss him terribly!

In 2019, Clarence was reunited with a former friend from his years in Edmonds. For the past two years, he and Joann have formed a loving bond that has been truly inspirational to watch. Joann has become a member or our family, and in the last months cared for Clarence. We are eternally grateful for her love for our father. We also wish to express gratitude to his care team at Arbor Village: Sam, Christy, and Jackie, to name a few.

A celebration of life will be held at 2 p.m. on Friday, Nov. 19, at the Darrington Community Center, 570 Sauk Ave., Darrington. Come prepared to share your favorite story. UW Huskies or Darrington Loggers attire optional.