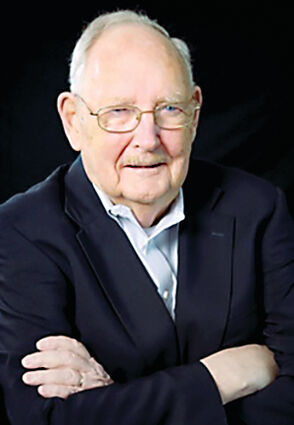 Vaughn Ashley Sherman passed away peacefully in his sleep on Friday, Oct. 8, 2021. He was 94 years old.

Born on Oct. 1, 1927, Vaughn was raised in Seattle. He attended the University of Washington and earned his bachelor of arts degree in 1951.

After serving in the Navy, he started his career as a fisheries biologist in Alaska and Washington state. He was recruited into the Central Intelligence Agency in 1952, which took him to places like Taiwan, Sweden, Spain, Denmark , and Vietnam, as well as Washington, D.C.

During this time, he and his first wife Eunice raised five children. Vaughn took early retirement from the CIA when Eunice became ill and subsequently passed away.

He gave back to his community in many ways. In 1980, he was appointed by Gov. Spellman to the Edmonds Community College Board of Trustees, where he served for 15 years. This was followed by many years on the foundation board of that college.

Vaughn was both a blogger and an author. He wrote many articles and books related to community college governance. One such book was “Walking the Board Walk,” which is helpful to nonprofit board members. He also published “Sea Travels: Memoir of a 20th Century Master Mariner” and “Sasha Plotkin’s Deceit,” an espionage novel based on Vaughn’s career as a CIA operation’s officer. To read some of his blogs, go to vaughnpip.wordpress.com. Sadly, his most recent blog on civility did not get published.

In 1994, Vaughn and Jan started the Martin Luther King School Dream Foundation, which provided scholarships to students who had attended MLK School in Seattle when Jan taught there. From 1999 through 2017, the foundation gave over 160 scholarships to former students.

After Jan’s retirement, the couple spent time at both their Edmonds home and their Sandy Point waterfront cabin in Ferndale, Wash., hanging out with family and friends, playing cribbage and rummy, enjoying the sunsets, and hosting large July 4 celebrations.

Vaughn is preceded in death by his first wife, Eunice, and son Chris.

He wore many hats in his nine-pous decades on earth: CIA agent, published author, community college trustee, philanthropist, publisher, blogger, cribbage and rummy mentor, friend, far far, Papa Vaughn, Vaughn, Dad, and husband. His generosity, high ethical and moral standards, wit, storytelling, and wisdom will be missed greatly by those who were fortunate enough to know him.

A Celebration of Life service is planned for Dec, 4, 2021, at 1 p.m. at the Edmonds Yacht Club, located at 326 Admiral Way in Edmonds. In lieu of flowers remembrances may be made in Vaughn’s name to the scholarship fund at Edmonds Community College.