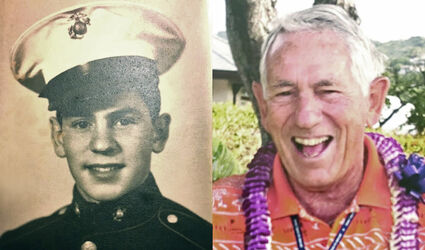 ‘A Good God, A Good Wife, and Good Scotch’

This was how Bill Green responded when he was asked how he maintained such a perpetually sunny disposition. Dad passed away on August 29th at home, just weeks before his 68th wedding anniversary. This November 11th would have been his 94th birthday.

The blended family lived in Sunnyside, WA, where they had an asparagus farm. Dad joined the Marines in his senior year. They offered high school credit and allowed him to join his class for graduation. World War II ended before he could leave San Diego. Eventually, he graduated from what is now Washington State University with a degree in economics. He was also elected president of the student body.

He started a career that would span more than 30 years with Shell Oil Company. Early in his career, he met a cute co-ed on the campus of University of Washington. He and Joann Dontos of Edmonds, WA, were married and had daughter Susan and son Peter.

Knowing that another transfer was inevitable and that he wanted to stay in Honolulu, Dad left the corporate world and bought a service station, which would become Kahala Shell. He would go on to own other stations, but Kahala Shell was the flagship. For over 30 years, and with managers Madeleine Snow and Spencer Fernandez, Dad worked to expand the site to include a carwash, convenience store, and repair shop.

Dad's commitment to the community begins with his 47 years of faithful membership with Waiokeola Congregational Church. He was a founding member of the Kahala Business Association. His support for education continued when he served on Wilson Elementary School's School Community Council. His support for community and education merged when, as a Rotarian, he brought a classroom set of dictionaries to his daughter's Farrington classroom.

A proud Cougar and avid UH Basketball Booster, Dad hosted the WSU team during the 1997 Rainbow Classic Tournament, and brought the team home for a sit-down Christmas dinner. Dad volunteered for over 30 years at the United and later Sony Open, and was the 2011 Chester Kapahea Volunteer of the Year.

Dad drove for Meals-on Wheels and drove his vintage red Mustang in parades as a member of The Aloha Mustang and Shelby Club. Until recently, Dad enjoyed jogging around Diamond Head and swimming at The Elks Club where he was a Life Member. He especially enjoyed spending summers in Edmonds.

Dad fought cancer until he couldn't. Dr. Marina Hitosugi-Levesque, of Queen's Geriatrics, was especially helpful as were the caregivers at Attention Plus Care.

A service will be held at Beck's Funeral Home in Edmonds at 11 a.m. Saturday, Oct. 23. Internment will follow at Evergreen Washelli at 2 p.m. where he will join his son, Peter. Friends may share memories of Dad at Beck's Tribute Center. In lieu of flowers, he may be remembered at the Hawaii Foodbank or Meals-on-Wheels.