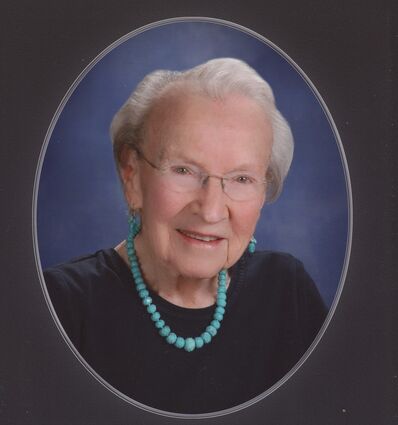 Jane Nehl, matriarch of the large extended Nehl and Scholes family, passed away peacefully at her home in Edmonds on Sept. 23, 2021, at the age of 101.

Jane's long journey began on Dec. 16, 1919, at her grandparents' home in Armour, S.D., just after the Spanish influenza pandemic ravaged the countryside. Raised on a working ranch in Paradise Flats, N.D., Jane graduated in 1937 from Carson High School. She spent two years at Jamestown College, earning a teaching certificate, and began teaching country school at the age of 19.

The day after the bombing of Pearl Harbor, she married Earl E. Nehl of Watauga, S.D. While Earl was stationed at the Bremerton Naval Base and then deployed in the Pacific, she worked at Frederick & Nelson in downtown Seattle. Soon after the war, she and Earl settled in Edmonds, and for 68 years enjoyed a loving marriage.

Jane was a consummate homemaker, displaying a vast array of skills while raising their five children. She enjoyed being actively involved in their schooling, Cub Scouts, Brownies, Little League, and hosting neighborhood Bible studies.

Jane was passionate about traveling, and frequently took trips back home to the Dakotas. During their retirement years, Earl and Jane wintered in Sun Lakes, Ariz., and traveled to Europe, the Mediterranean, and Australia.

Jane was a member of Holy Rosary Parish for 75 years. She was loved and admired by all who knew her. Her character was revealed through her quiet dignity, love, kindness, and uncommon grace.

Like so many of the Greatest Generation who endured the Great Depression, Dust Bowl, and WWII, she came out stronger and very resilient.

The Nehl Family would like to thank the staff at Evergreen Hospice Care and the caregivers from Visiting Angels, especially Joan and Donna, who through their love and dedication truly made Jane's final years comfortable.

Donations can be made in Jane's name to the Earl & Jane Nehl Learning Center at the University of Mary, 7500 University Drive, Bismarck, ND 58504. A funeral mass will be held 10 a.m. Oct. 21, 2021, at Holy Rosary Parish in Edmonds. She will be interred alongside Earl at Tahoma National Cemetery.

"We die with the dying

See, they depart, and we go with them.

We are born with the dead:

See, they return, and take us with them."