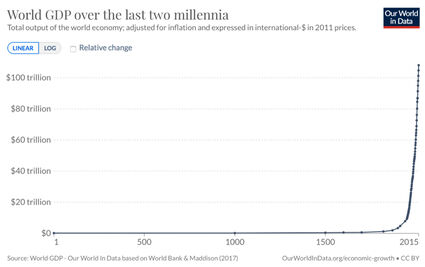 Our remarkable species is only about 200,000 years old. This is brand new by evolutionary standards. In that short period, we have exploded onto the scene.

Most of that explosion has happened even more recently. The current population is 7.9 billion. Just a century ago it was 1.9 billion. Population has quadrupled in just a few generations.

Humans now dominate most of the earth. We alter every ecosystem on land, on sea, and in the air.

Are there too many of us now? Will there be too many of us in the future? The first step in answering these questions is to try and measure what our impact on the world is.

Population counts are a part of this but there is another measure that might be at least a little more accurate.

The Gross World Product (GWP) estimates our use of goods and services. This number includes both changes in population and changes in how much each person consumes.

It is an imperfect impact measurement because how consumption effects our environment is not precise and can change through time. An example is the car. A modern vehicle produces less pollution than those in the past. But, there are a lot more now and we travel farther distances.

The value of the GWP number is that is a relatively accurate calculation and it gives us a rough idea of what our effect is.

The accompanying graphic shows how GWP has grown over the last 2,000 years. It clearly shows how human activity has gone into warp drive recently. We have bigger and more houses, factories, farms, cars, TVs, computers, electric nose hair trimmers, etc.

The data shows that GWP is about 20 times larger now than it was a century ago, a much bigger increase than that of population alone.

A GWP that increases faster than population means an improving standard of living. This is something that is almost universally proposed as a good thing. In the future that may no longer be true if we consider the negative consequences of large-scale consumption on our lives.

Some argue that we are past the earth's human carrying capacity now. One obvious symptom of this is the climate catastrophe. There are also an increasing number of conflicts over and shortages of things like land, water, heavy metals, and oil.

Whether or not this is true, we can't support the kind of growth over the next hundred years that we have had in the past. Estimates are that we will be hitting a world population of 11 billion by the turn of the century, but the rate of population increase is moderating.

If this trend continues, we may peak at about this 11 billion mark. It is less clear if consumption rates will peak as well. Declines in GWP typically happen with major disruptions like diseases, wars, and depressions.

Managed, gradual will be more humane and less disruptive. That approach requires that we figure out how to reduce consumption and to produce things that cause less impact to the world around us.