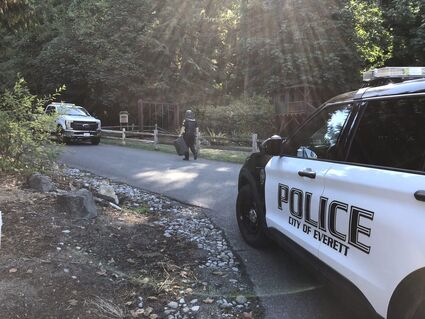 A small explosive device found on a playground near Woodway Town Hall was successfully removed by a member of Everett Police Department Tuesday, Sept. 21.

There were no injuries and no known suspect information, according to Edmonds police, who provide police services to the Town of Woodway. Shoreline police also assisted.

According to Woodway Mayor Mike Quinn, Public Works crew found the device at about 9:35 a.m. in the John Bush play area near Town Hall.

Edmonds police evacuated Town Hall and nearby residences while they investigated,

"The Everett Bomb Squad was called in to remove the device," Quinn wrote in a message to residents. "There was some vandalism to the play area. Thankfully, there were no injuries. An adjacent neighbor reported hearing a 'loud and freighting explosion' at approximately 1:30 a.m., but did not call 911. The police did not find any other suspicious devices in the area."

I would like to know what kind of bomb? What was its damage potential? Why someone didn't call the police at 1 Am and report hearing it... Hear it... I would be outside myself announcing it to the neighborhood. People time to be curious, time to be on the look out for even what may seem irrelevant...Time to turn brains on and that common sense button...Its starting and it is not going to be 3 months or 6 months it is NOW.. Bombs in parks with children isn't enough for us to know we need not only police protection but extra detectives who deal with rioting and monitoring etc. IT is Time. We did this now we see how to fix it.